Myth 1: Two languages compete for resources.
Myth 2: Knowledge, acquired in one language, is not accessible in the other language.
Myth 3: The first language must be spoken well, before the second language is learnt.

What happens if someone learns a second language? Nowadays, multilingualism is generally considered to be an enrichment and not a problem as was believed formerly. Nevertheless, some myths around multilingualism persist, even though about half of the world’s population speaks at least two languages.

Some of the most abundant myths concern the representation of language in the brain. One myth is the belief that: The more one language is learnt, the more the other language is lost. Another myth is that it is thought that the two languages lie next to each other in separated brain areas and have no points of contact. This has given rise to another myth that knowledge, which was acquired in one language cannot be transferred to the other language. From these myths, the conclusion is drawn that the separation of languages in the brain is necessary, as the simultaneous learning of two languages during infancy could lead to a mix of both languages in the brain. This again, would lead to slower development of the child. Therefore one language should be learned “correctly” first, before the next language is learnt.

However, scientific evidence as well as every-day observations contradict these myths. But before discussing the arguments against these myths, let us first have a look on the origin of these myths.

What is the origin of these myths?

These myths arose from a combination of (a) politically motivated factors, (b) certain linguistic phenomena as well as (c) misinterpretation of older studies:

(a) Languages have an very important cultural and political meaning. Hence, they came into play with ideologies. Many places came up with the idea that certain languages are superior to others. Consequently, there were fears that the inferior languages would “pollute” the superior languages. In some countries drastic measures were taken: Children’s mouths were washed out with soap, when they were speaking in their mother tongue.

(b) Politically motivated multilingualism is difficult to enforce. Countries with more than one official language, like Singapore, undertook experiments to show that eventually one language prevails and the other languages disappear. Bilingual education is often not successful, above all in schools. From these facts, it could be concluded that brains already operate at full capacity with one language.

Findings in medicine could be another origin of these myths. Cases are reported, in which patients had “wholly“ forgotten one language, but not the other after a brain damage. Hence, people concluded that different languages take over totally different brain areas. However, this does not mean that these languages are “fighting” against each other in the brain and thereby cause damage?

(c) Studies at the beginning of the 20th century supposedly proved this. According to these studies, bilingual persons have lower intelligence. However, the circumstances in which these studies took place were not considered. Mostly children of immigrants were examined. Those children often were undernourished and lived in difficult social environments. It should also be taken into consideration that these children only started to learn the national language in kindergarten or in school, and thus were not able to speak it well in the beginning. That means that these studies compared the intelligence of children from families which were well-off, with the intelligence of socially disadvantaged children, whose families spoke the national language below average. The differences that were found were ascribed to bilingualism but not to the social environment.  Finally, from these studies, it was erroneously concluded that multilingualism is detrimental.

These explanations give an insight how these myths developed. But how can these myths be debilitated?

This myth is based on the assumption that brains have a limited learning capacity, which they reach during language acquisition at some point. If the brain is “filled” with one language, parts of the first language must be lost, when a second language is acquired. It is possible to compare the language center of the brain with a cup: if the cup is already filled with coffee, it should not be filled up with tea. If this is done, nevertheless tea will be in the cup, but less coffee, and the whole drink will be messed up.

1. There are many everyday examples to contradict this myth. Neuroscientific knowledge is not absolutely necessary to debilitate this myth. Every-day knowledge is sufficient: According to this myth, nobody should be able to speak several languages perfectly, because nobody’s brain has space for another language. Someone like Cardinal Giuseppe Mezzofanti, who was fluent in ten languages at the age of 12 and in 40 languages at the end of his life, should therefore not exist.  The same can be said for Sir Richard Francis Burton who spoke 25 to 30 languages so well, that he was often considered to be a native speaker.

2. Increased knowledge of one language can come along with increased knowledge of another language. Studies showed that students who learnt one foreign language in school do not become worse in their native tongue. On the contrary, with regular lessons, it is possible for students to ameliorate in both languages. 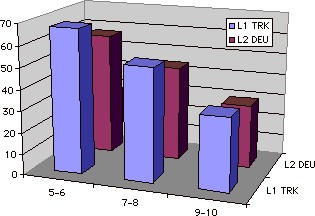 Knowledge in both languages increases with school years
The number of mistakes in Turkish (L1) as well as in German (L2) decreases with time of schooling.

Myth 2: Knowledge, which was acquired in one language, is not accessible in the other language.

1. Someone who learns to calculate in German can also calculate in English. Once again,  everyday experience does not support this myth. Everyone can confirm, that someone, who learnt the principle of addition in German is able to apply it to English and German numbers. The same holds true for someone, who learnt difficult principles, like “democracy” in one language, is able to understand this concept in another language. If he would not be able to explain this concept, it is probably due to deficiencies in vocabulary but not because it cannot be transferred to the other language.

2. Knowledge must not be stored in the format of  language. Studies have shown: the more knowledge is acquired in different languages, the more its storage is unhitched from language. Knowledge is no longer stored in the format of language, but in a different manner, e.g. in pictures.  Multilingual persons sometimes cannot remember in which language they absorbed something, e.g. if they watched a movie in French, German or English.

Myth 3: The first language must be spoken well, before the second language is learnt

This myth supposes that languages must be learnt separately from each other.  If this is not the case, no language would be learned well. This myth is analogous to a dancing class: if you learn waltzing at the same time as fox-trot, you should learn neither waltz nor fox-trot well, because you will confuse the steps of one dance with the steps of the other dance. This means that no teacher will teach waltz and fox-trot at the same time. Instead there will be some time between the lessons of each dance. This time however does not concern years (like language learning) but hours or days.

2. Multilingual education does not lead to retarded language development. Multilingualism does not lead to a retarded language development. Children pick up languages extremely fast, even if they might confuse the languages sometimes. If there is still a retardation of language development, the child might have a language deficit. A second language might enhance this deficit, especially if the deficit is not recognized and treated. In this case a second language might actually be an extra burden for the child. If children do badly in their first language, a good diagnosis and possibly therapy is necessary. A possible cause for such a deficit could be difficulties in sound differentiation, which should be diagnosed as early as possible.

3. Blending of languages does not result from confusion or lacking language comprehension.