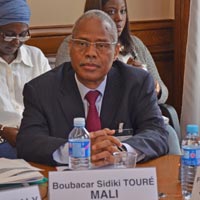 SWAC Colloquium on the Security-Development Nexus

Mr. Touré highlights key features of northern Mali and presents government actions that were undertaken to help this region develop. He recalls in particular the policy of positive discrimination resulting from various agreements that were signed from 1991 and implemented in favour of the Touaregs.

Excerpt: "Mali is a great country with a centuries-old culture. Its diverse and varied peoples comprise several ethnic groups who have intermingled and intermarried down the ages. Each community has retained its identity, culture and traditions. In this regard, the policies pursued by the Malian authorities have always been based on open and constructive dialogue.

In the north of the country, commonly known as the “septentrion”, […] the regions of Gao, Timbuktu and Kidal are suffering from chronic insecurity in the form of armed banditry, intra- and inter-community armed conflicts, kidnapping, and mistrust among communities. All these factors combined create a poisonous climate which is inevitably hindering development. Long before the current insurgency, the region was already plagued by hostage-taking and blatant and repeated acts of aggression. This brought tourism – a major source of income – to a halt across the entire country. So how can we bring peace, security and development to a region suffering from recurrent crises such as in northern Mali?

Given such difficult circumstances, this is certainly a delicate and complex mission. However, despite Mali’s limited resources, the authorities have always been driven by an unwavering commitment to bringing security to the northern regions. They have clearly understood that the only solution lies in the development of these areas. It is worth recalling the policy of positive discrimination resulting from various agreements that were signed from 1991 and implemented in favour of the Touaregs.  Many development projects have been set up with bilateral and multilateral partners. The entire nation has willingly accepted that almost all of its Official Development Assistance from the European Union is channelled into the northern region.

As a result, from 2006 to 2012, investment in this part of Mali totaled 120 million euros, together with contributions from the national budget and other sources of funding. One flagship project is the Special Programme for Peace, Security and Development in northern Mali (PSPSDN), a result of the 2006 Algiers Agreement which encompasses several development projects. The first phase of the PSPSDN involves the setting up of around forty facilities to serve as barracks for the armed and security forces as well as public administration structures. It also includes the construction of twenty socio-economic facilities for the populations of the Kidal and Gao regions, including health centres, schools, modern wells, housing for officials, etc.

This ambitious programme has raised a great many hopes. Concrete results were expected in the short term. The Malian authorities were counting on the PSPSDN to curb insecurity, poverty, youth unemployment, hostage-taking and all forms of trafficking. Facing the widespread turmoil of the past and identity-based insurgencies, the authorities have always worked with a constructive vision. They resort to dialogue rather than arms. Despite difficulties, this approach has helped defuse tensions and preserve a degree of social cohesion and political stability in the country – the only way forward to sustainable development.

The PSPSDN had barely been launched when the war in Libya shattered an already fragile balance in northern Mali. Indeed, from September 2011, all experts agreed that the situation in the Sahel was extremely explosive. The direct consequences of the war in Libya brought new threats to the security of the region with the influx of armed groups such as former combatants from Libya and the circulation of weapons.

The security challenges in the Sahel-Saharan strip have varied implications for the neighbouring states and the countries of Western Europe alike. The Malian authorities have constantly alerted the international community about the return of hundreds of armed men from Libya. Their return sparked the resurgence of the rebellion that had ceased at the end of 2009 in the northern regions of Mali. This vast and hard-to-control quasi-desert area has been a safe haven for the AQIM combatants for several years. They use it as a base to launch operations into other countries along the Sahel-Saharan region, namely in Algeria, Mauritania and Niger.

It should be stressed that, alongside Mali, these countries had previously decided to set up a Joint Military Staff Committee of the Sahel Region (CEMOC), based at Tamanrasset (Algeria), with the aim of conducting an annual assessment of the security situation in the Sahel and establishing joint actions as part of a common strategy to combat terrorism and organised crime.

Through their repeated warnings, the Malian authorities sought to rally all countries and populations to the fight against the problem of insecurity in the Sahel-Saharan region and to pursue the ultimate goal of bringing about sustainable development and shared progress for society.

Unfortunately, these warnings have been in vain. The rest is history, and today the situation could hardly be more alarming. Mali is cut into two. The northern regions are occupied by heavily armed groups. Hundreds of thousands of people have been displaced. Serious human rights violations are being perpetrated on the ground (rape, murder, etc.).

Mali is facing huge development challenges and cannot afford an armed conflict which has incalculable consequences on national cohesion and the stability of the country and the sub-region. History can serve to guide us and shed light on the present crisis. The balkanisation advocated by the armed groups is not a solution for socio-economic development. Balkanisation is the contrary of development. Balkanisation means war, economic decline and the violation of human rights. I would like to take this opportunity to say that the exact opposite of balkanisation is the unity, fraternity and solidarity between the communities in Mali. In other words, it is us all pulling together and respecting our diversity rather than applying an “every man for himself” approach."

Claims must be put forward within the framework of democratic dialogue. They cannot be enforced by a gun, because peace and security remain the fundamental and necessary conditions for development. There can be no future for the Malian people and no chances for development without unity. As the founding charter of UNESCO says so well, “Since wars begin in the minds of men, it is in the minds of men that the defence of peace must be constructed.”

It is our moral duty to continue working with determination and perseverance alongside our brothers who have taken up arms to persuade them to accept and share a culture of peace that allows people to flourish, while committing to a spirit of reconciliation and face up to the only combat that is worthy of the name: the fight for development.