The Sahel and West Africa Club Secretariat is monitoring the coronavirus (Covid-19) situation closely. The pandemic is unfolding as the region faces a food crisis of exceptional magnitude and high levels of insecurity. This webpage features updated data, analyses and articles on the situation.

The Covid-19 pandemic adds an additional layer to pre-existing crises. A new collaboration with Cartooning for Peace offers an alternative look at the challenges facing the region. More 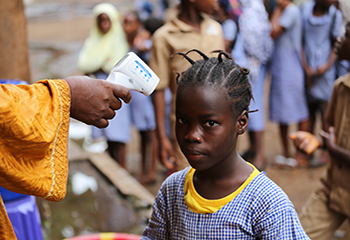 A new policy brief explores some of the potential impacts of Covid-19 in West Africa and outlines a number of policy implications to help support government actions (Image: GPE/Tabassy Baro). More 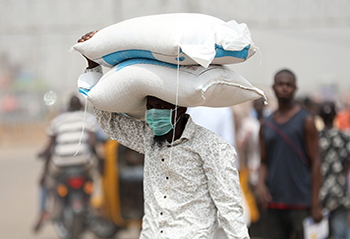 The coronavirus (Covid-19) risks overshadowing and compounding the already severe food and nutrition crisis in the Sahel and West Africa that threateneds millions of people (Image: K.Sulaimon/AFP). More 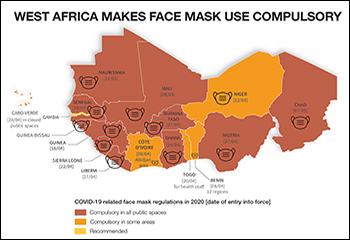 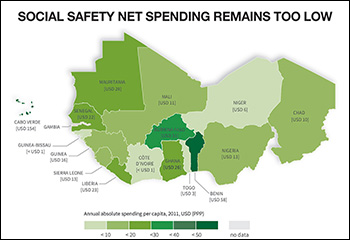 In the context of Covid-19, social safety nets are a key tool for improving food and nutrition security, eradicating poverty and building resilience. But spending remains too low. More 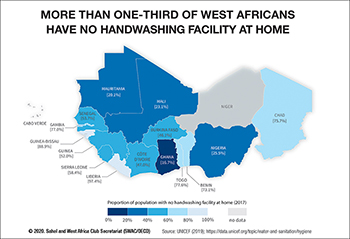 More than one-third of West Africans have no handwashing facility at home. More 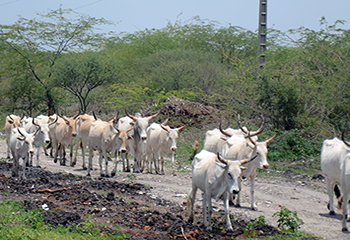 Pastoral communities were already facing many challenges long before the Covid-19 outbreak. Find out more on the current situation and what is being done to support the agro-pastoral sector. (Image: J. Wanjiru) More 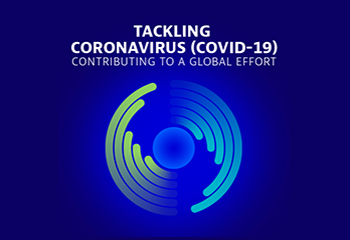 The OECD launched a policy hub in response to the crisis to provide information on policy responses in countries around the world, together with OECD advice. More

Information notes to take stock of health, socio-economic and geo-strategic dimensions that are insufficiently explored.

Note 1: Covid-19: The Current State of Vaccinations in West Africa

COVID-19 and West Africa in numbers

It was at the end of February 2020 that the first case of Covid-19 was recorded in Nigeria. It took barely a month for all countries in the region to be affected by the pandemic. Thereafter, the region has not escaped successive waves of epidemics, albeit with a lower frequency - four waves instead of the five usually observed in the rest of the world - but above all on a smaller scale.

In January 2022, the number of positive cases at the regional level corresponded to only 0.22% of the global total, and the number of deaths to 0.18%. For the past two and a half years, the youth of the population and climatic conditions have been the factors most frequently put forward to explain why the region has been so spared, even though it represents 5.5% of the world population.

After two years of pandemic, it is a happy ending compared to the catastrophic scenarios announced at the beginning.

The number of cases recorded also depends on the efforts made by states to implement effective testing policies. Unsurprisingly, the number of tests performed in West African countries remains very low and prevents accurate monitoring of contagion levels. For example, only 10 million tests have been conducted in West Africa over the past two years. For comparison, this corresponds to less than 85% of the weekly number of tests performed in France between January 3 and 9, 2022, at the height of the epidemic of the Omicron variant (Santé Publique France, 2022).

Overall, whether it is the detection of positive cases, the number of tests performed or the number of deaths recorded, it is undeniable that the figures must be interpreted with caution. The number of deaths attributable to COVID-19 in West Africa does not take into account those who did not die in hospital, those who were tested before being tested, and those who died for other reasons in hospital due to the congestion caused by the epidemic. The WHO estimated in October 2021 that the number of infections in Africa would be more than 7 times higher than that recorded by the health authorities, i.e. 59 million individuals against 8 officially recorded.

In the wake of the rest of Africa, the region was faced with a third epidemic wave starting at the end of June 2021 and reaching its peak in August. The alpha variant ("English" variant) and the beta ("South African") variant were then in the majority in Africa, with the appearance of new emerging types, including the kappa variant, a sub-lineage of the delta ("Indian") variant.

As of late December 2021, a fourth wave of unprecedented magnitude has begun. This is evidenced by the number of new cases that increased by 968% between December 8, 2021 and January 8, 2022 in West Africa.

With the greater contagiousness of the delta variant, the epidemic plateau of the third wave had already reached unprecedented levels and stretched over a longer period than that recorded during the second wave (January-February 2021). With the emergence of the Omicron variant, the plateau of the fourth wave could be two and a half times higher than that of the previous wave.

If the current trends in South Africa continue, a similarly dramatic decline in weekly infections could be expected within weeks at the regional level.

Between February and August 2021, during the respective peaks of the second and third waves, the number of deaths attributable to Covid-19 had almost doubled at the regional level, with record increases in countries such as Liberia (188% increase), Sierra Leone (134% increase) and, to a lesser extent, Senegal (80% increase). At the beginning of this fourth wave, the number of deaths in the region has increased by 22% compared to the peak of the third wave (August 2021).

Despite the scarcity and unreliability of data, this fourth wave is very worrying in a context where hospital capacities are largely insufficient and intensive care units remain almost non-existent, and even though the entire hospital system has already been seriously undermined since the beginning of the pandemic.

According to a recent study published in "The Lancet" ("Patient care and clinical outcomes for patients with COVID-19 infection admitted to African high-care or intensive care units (ACCCOS): a multicentre, prospective, observational cohort study", The Lancet, 2021, 397:1885-94), the mortality rate of critical patients detected as positive for COVID-19 is higher in African countries than in comparable studies elsewhere in the world.

The study shows that this excess is directly attributable to the lack of critical care units, resuscitation beds, and dysfunctional hospital admission systems, but also to the importance of co-morbidities such as HIV/AIDS, diabetes, kidney and liver disease.

Many countries in the region are not able to carry out this census on a daily or even weekly basis, due to major dysfunctions in the collection, compilation and centralization of statistical data from hospitals to the national civil registration system.

This statistical vacuum, which prevents an accurate assessment of excess mortality, is primarily attributable to the fact that less than 30% of deaths are registered annually in African countries on average. When they are registered, the delays in registration are particularly significant. In addition, the majority of civil registration certificates do not mention the cause of death and therefore do not comply with the coding system in force according to the International Classification of Diseases (ICD), which allows for coding of morbidity and mortality according to WHO recommendations.

Without wishing to make risky comparisons between Southern Africa and West Africa, the analyses produced by the SAMRC (South African Medical Council) based on weekly monitoring of excess mortality are unequivocal. Comparing the number of deaths recorded for each month of 2020 with the corresponding monthly statistics for 2019, there is an average increase of 60% in deaths.

Testing is a window into the pandemic

Low testing capacity means that a large majority of COVID-19 patients are not included in official statistics. By September 2021, the number of tests performed in Africa will have reached just 5% of all tests recorded globally (Our world in data, 2021). More worryingly, the region's testing capacity accounts for just over 8% of all testing done at the continental level. The number of tests performed in Africa also decreased by nearly a third (28.68%) in September 2021 compared to a year earlier.

In January 2022, only 10% of the regional population will receive a complete vaccination course, consisting of two doses except for the Janssen vaccine (the notion of a "complete course" does not include the addition of booster doses, which are not currently envisaged by national health policies). Disparities between countries in the region in terms of immunization coverage are also pronounced, with eleven countries remaining below 10% while Cape Verde has reached over 46%.

The COVAX initiative's goal of providing middle- and low-income countries with 1.3 billion doses by the end of 2021 is far from being met, with only 322 million doses administered on the continent as of January 2022.

Difficulties in financing and implementing the ACT gas pedal are at the root of the delays in national immunization. To diversify their procurement, West African countries have developed bilateral partnerships and benefited from donations, mainly from China. Recent announcements by the United States and Europe regarding economic recovery in Africa may change the situation and help to get immunization off the ground.

However, bi- and multilateral vaccine deployments have so far been ad hoc and have not been supported by sufficient strategies to address the challenges of weak transport and health infrastructure, as well as insufficient epidemic tracking, case tracing, and sequencing capacity.

Percentage of fully vaccinated population in relation to total population

The level of acceptability of the vaccine by the population also raises questions. Today, the population seems to be reluctant to be vaccinated, partly due to the phenomena of misinformation and conspiracy theories, but also because a majority of individuals do not consider themselves exposed to the disease.

However, a recent WHO study based on seroprevalence surveys (the detection of antibodies that indicate contact with the virus) carried out in six African countries, shows that the rate of infection is much higher than officially recorded. According to this study, 42% of Nigeriens have contracted COVID-19, while the official figure announced remains very low (0.02%).

These new elements support the idea that the degree of contagiousness of the virus has been seriously underestimated and that the goal should be to vaccinate at least 70% of the total population in order to avoid serious forms of the disease and the risk of hospitalization. But is it reasonable, given the state of scientific knowledge, to consider doing so in a region where two thirds of the population is under 15 years of age?

On the other hand, the impact of regional and continental under-vaccination will continue to be felt for a long time. With the risk of new variants developing in countries with lower levels of vaccination, it is clear that investors and tourists will continue to abandon African economies that are already struggling to recover from the confinements and curbs that governments have been forced to impose.

For more documents on Covid-19 its impact on food and nutrition security, visit the dedicated page from the Food Crisis Prevention Network (RPCA)

When a global virus confronts local realities: Coronavirus (COVID-19) in West Africa (11 May)

COVID-19 and Africa: Socio-economic implications and policy responses (7 May)

Developing countries and development co-operation: What is at stake? (28 April)

ECOWAS communiqué no.2 of 6 April 2020 on the fight against the coronavirus disease (6 April)

Impact of the Coronavirus (Covid-19) on the African Economy