Over the last decades, bilateral tax treaties, concluded by nearly every jurisdiction in the world, have served to prevent harmful double taxation and remove obstacles to cross-border trade in goods and services, and movements of capital, technology and persons. This extensive network of tax treaties (3000 to 4000 treaties in force worldwide) has, however, also given rise to treaty abuse and so-called "treaty-shopping" arrangements.

Taxpayers engaged in treaty shopping and other treaty abuse strategies undermine tax sovereignty by claiming treaty benefits in situations where these benefits were not intended to be granted, thereby depriving jurisdictions of tax revenues.

Treaty abuse is one of the most important sources of BEPS concerns. It is undesirable for several reasons, including:

As part of the BEPS package, the Action 6 Report sets out one of the four BEPS minimum standards, which is that members of the BEPS Inclusive Framework commit to include in their tax treaties provisions dealing with treaty shopping to ensure a minimum level of protection against treaty abuse. They also agreed that some flexibility in the implementation of the minimum standard is required as these provisions need to be adapted to each jurisdiction’s specificities and to the circumstances of the negotiation of tax agreements.

The minimum standard on treaty shopping requires jurisdictions to include two components in their tax agreements: an express statement on non-taxation (generally in the preamble) and one of three methods of addressing treaty shopping.

The Action 6 Report sets out other specific rules and recommendations to address other forms of treaty abuse.

To foster the implementation of the minimum standard and other BEPS treaty-related measures in the global treaty network, a Multilateral Instrument (the MLI) that can modify existing bilateral tax agreements was concluded.

The first peer review on the implementation of the Action 6 minimum standard reveals that a large majority of Inclusive Framework members are now in the process of modifying their treaty network to implement the minimum standard and other BEPS treaty-related measures.

The first peer review reports shows the efficiency of the Multilateral Instrument (MLI) in implementing the minimum standard and the other treaty-related BEPS measures. It is by far the preferred tool of Inclusive Framework members for implementing the minimum standard. The majority of the jurisdictions that have signed the MLI have listed almost all their treaties under the MLI.

The provisions of the MLI started to take effect with respect to treaties concluded by pairs of jurisdictions that have signed and ratified the MLI. For the treaties for which the MLI is effective, tax administration can now use effective treaty provisions to put an end to treaty-shopping.

More on the MLI

As set out in paragraphs 22 and 23 of the Final Report on Action 6, jurisdictions have agreed to include in their tax agreements an express statement that their common intention is to eliminate double taxation without creating opportunities for non-taxation or reduced taxation through tax evasion or avoidance, including through treaty-shopping arrangements. The following preamble now appears in the 2017 OECD Model Tax Convention:

Jurisdictions have also committed to implement that “common intention” through the inclusion of treaty provisions in one of the following three forms:

Concerns about treaty shopping are not new. In 1977, the concept of “beneficial owner” was introduced into the dividends, interest, and royalties articles of the OECD Model Tax Convention to clarify the meaning of the words “paid to”, and deal with simple treaty-shopping situations where income is paid to an intermediary resident of a treaty country who is not treated as the owner of that income for tax purposes (such as an agent or nominee).

In 1977, the Commentary on Article 1 of the OECD Model was also updated to include a section on the improper use of tax agreements. In 1986, the Committee on Fiscal Affairs (CFA) published two reports: Double Taxation and the Use of Base Companies and Double Taxation and the Use of Conduit Companies. In 2002, the Committee published the report, Restricting the Entitlement to Treaty Benefits. The Commentary on Article 1 was expanded on several occasions, notably in 2003, with the inclusion of sample provisions that countries could use to counter treaty shopping.

A review of jurisdiction practices shows that they have tried to address treaty shopping in the past and have used different approaches to do so. Some have relied on specific anti-abuse rules based on the legal nature, ownership, and general activities of residents of a jurisdiction party to a tax agreement. Others have favoured a general anti-abuse rule based on the purpose of transactions or arrangements. 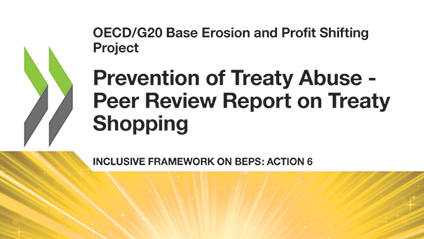 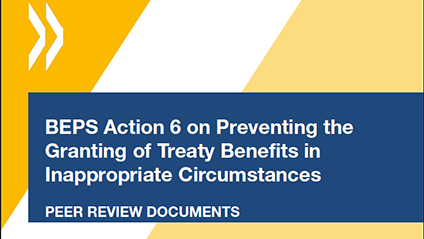 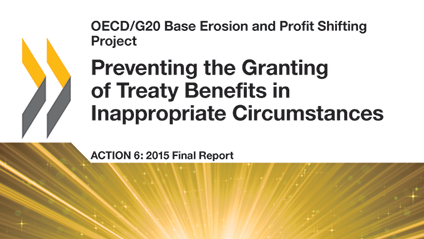 Preventing the Granting of Treaty Benefits in Inappropriate Circumstances