These highlights contain extracts from the 2007 edition of the report, Agricultural Policies in Non OECD Countries: Monitoring and Evaluation 2007. A key objective of the OECD is to facilitate policy dialogue among policy makers with a view to identifying good practices across a wide range of economic and social policy areas. The OECD places a high priority on its dialogue with non-member economies (NMEs), recognising that such dialogue contributes to the quality and relevance of our work and helps us collectively to address global economic challenges. Effective dialogue depends on the wide dissemination of consistent and comparable information, analysis and evaluation of current policy developments.

This monitoring exercise documents and evaluates the latest agricultural policy developments in those NMEs for which the OECD has undertaken country reviews of agricultural policies. Eight countries: Brazil, Bulgaria, China, India, Romania, Russia, South Africa and Ukraine are included in this update. Definitions of support indicators together with a review of support measurement issues and a comprehensive statistical annex, containing a wide range of contextual information for these countries, are also incorporated in this report.

This monitoring exercise mirrors that carried out each year for OECD countries and provides a common benchmark for international dialogue on agricultural policy reform. In particular, the estimates of the level of support to producers (PSE), and to the agricultural sector as a whole (GSSE) provide a much better understanding of the nature and functioning of agricultural policies by:

The OECD approach to this policy monitoring process is unique. Local experts are engaged to provide background information while governments of countries under review and OECD member countries actively participate in the review of draft reports. This process helps ensure accuracy of the results, awareness and “buy-in” by national policy makers and provides an important element of capacity building.

The agricultural sectors of many developing countries have changed dramatically in the past two decades, due to rapid policy reforms. This report describes and analyses government support to agriculture in eight non‑OECD nations: Brazil, India and South Africa (three large developing economies); Bulgaria, Romania, Russia and Ukraine (four formerly planned economies); and China, which combines features of both groups.

Agricultural policy reforms during the past decade have resulted in levels of government support to producers, as measured by the Producer Support Estimate (PSE), generally well below the OECD average. For the 2003‑05 period, estimates of government support to producers as a per cent of gross farm receipts (%PSE) were: Ukraine (3%), Brazil (5%), South Africa (8%), China (8%), Bulgaria (8%), Russia (17%) and Romania (27%); compared with the OECD average of 30%. Producer support estimates for India are not yet available but would appear to be slightly below the OECD average.

Support to agriculture is dominated by market price support (MPS) and input subsidies, the least efficient and most distorting ways of providing agricultural assistance. While OECD countries generally reduced MPS during 2003‑05, the levels of MPS in the non‑OECD countries under review have generally increased or remained unchanged.

More targeted forms of support not linked to production are increasingly being sought to pursue specific goals, such as raising the incomes of poor farm households, promoting rural development and protecting the environment. Such policies are to be preferred as economic growth alone is unlikely to solve, and can sometimes exacerbate, economic and social divisions.

The ad hoc nature of many recent policy developments does not provide the predictable policy environment that is essential for growth and adjustment. There are several examples in this report of ad hoc and unsustainable agricultural expenditures being used to support markets. While all the countries in this report have demonstrated that profound agricultural policy reform is both possible and beneficial, inconsistency in policy implementation has in some cases undermined the effectiveness of current policies and compromised further reforms.

The countries in this report provide relatively little General Services Support (GSS), which funds activities such as research and development, marketing and infrastructure improvements. While there is a strong case to be made for the benefits of increased GSS, budgetary resources have instead often been used in inefficient ways to support producer incomes. A somewhat worrying development is that the share of GSS in total support has been declining for several countries in this report, while producer support has risen.

The long-term future for most semi-subsistence farming households lies outside agriculture, so there is a need for measures that facilitate income diversification and the exploitation of non-farm activities, such as improved access to education in rural areas, better health care, pension and other social security services, enhanced land property rights and rural tax reforms. 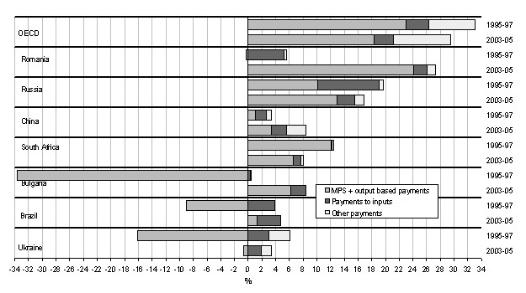 The report can be purchased in paper or electronic form through the OECD’s Online Bookshop. Subscribers and readers at subscribing institutions can access the online version via SourceOECD.