Since Indonesia became a Key Partner in 2007, the country’s engagement with the OECD has deepened significantly. In 2009, Indonesia became a member of the OECD Development Centre to engage in knowledge sharing on innovative policies to boost development. Indonesia was the first of the OECD’s Key Partners to sign a Framework of Co-operation Agreement in 2012, followed by the Privileges and Immunities Agreement in 2013. In March 2015, it welcomed the OECD’s first regional office in Southeast Asia, opened in Jakarta. During the OECD Ministerial Council Meeting in June 2017, OECD Secretary-General Gurría and Indonesian Finance Minister Sri Mulyani signed the renewal of the OECD- Indonesia Framework of Co-operation Agreement for the next period of five years.  In addition, Indonesia's partnership with the OECD has served as a valuable tool to advance co-operation, including the launch of the OECD Southeast Asia Regional Programme in 2014 and its co-chair of the Programme from 2014-2017.

The new Programme focuses on the following priority areas:

The OECD actively supports the Indonesian government in implementing its reform agenda in many policy areas, including macroeconomic policy, tax, investment, trade, regulatory policy, governance and anti-corruption. It is also supporting the government's efforts to ensure that economic growth is more beneficial to all Indonesians, improving education, skills and labour market outcomes, as well as to foster a more sustainable and resilient growth model.

For an overview of the collaboration and work of the OECD with Indonesia, take a look at the Active with Indonesia brochure (also available in Bahasa). 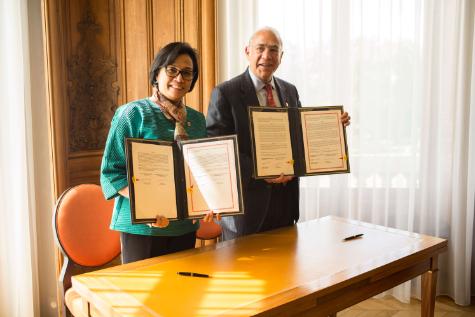 Since 2012, Indonesian ministers have regularly attended and contributed to the OECD Ministerial Council Meetings. The country participates actively in the substantive work of the OECD’s specialised Committees and attends high-level events organised at the OECD Headquarters and in the Southeast Asian region.

Indonesia is an Associate and a Participant in nine OECD bodies and adheres to more than ten OECD legal instruments. Moreover, it is fully integrated into the OECD’s regular work programme and covered in flagship publications and statistical databases. This engagement provides an excellent basis to further develop and deepen OECD-Indonesia co-operation and partnership strategically

The partnership has delivered important tools, such as regular Economic Surveys which provide in-depth analysis of policies for inclusive and sustainable growth. Reviews on Investment Policy (2010), Regulatory Reform (2012), and Educational Policy (2015), along with Open Government (2016), have facilitated the implementation of policy reforms. Indonesia is also a member of the Global Forum on Transparency and Exchange of Information for Tax Purposes, and the Indonesia-OECD Corporate Governance Policy Dialogue. In 2015, Indonesia was among the first countries (along with China and Thailand)  that achieved Association status in the International Energy Agency.

Education in Indonesia: Rising to the Challenge (2015)