The OECD has been involved in the Berlin Process for several years by engaging in the policy dialogue process, providing analytical input and policy advice and by supporting the rotating Presidencies. The 2021 Berlin Summit takes stock of seven years of the Berlin Process initiative, discussing future priorities to reinstate economic growth and accelerate regional integration.

The OECD Secretary General, Mathias Cormann, participated in the Leaders’ Meeting of the Western Balkan Summit, alongside with 15 Heads of State and Governments from the Berlin Process participating economies, including German Chancellor Merkel, French President Macron and Italian Prime Minister Draghi, as well as ten leaders from intergovernmental and international organisations, including the President of the European Commission, von der Leyen. 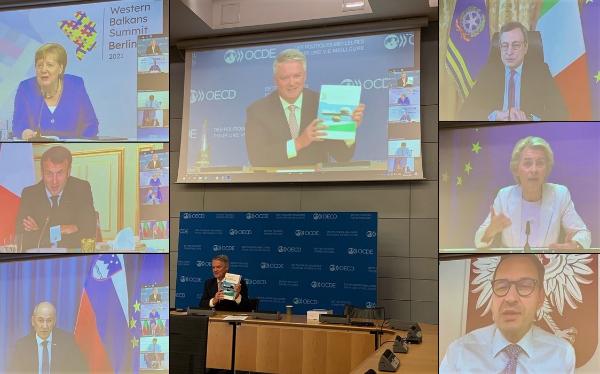 During the Summit, EU Leaders voiced their strong support for the Western Balkans’ EU perspective and expressed their determination to further intensify engagement at all levels to support the region’s political and economic transformation. But the governments in the region will need to continue to deliver on reforms, particularly in the area of the rule of law and reconciliation. Leaders of the Western Balkans renewed their sustained commitment to inclusive regional cooperation as a fundamental factor for the Western Balkans' EU accession path. Participants underlined the specific added value of the Berlin Process in promoting sustainable transport, clean energy and digital connectivity projects and in creating a Common Regional Market.

In his remarks, the OECD Secretary General announced the launch of the third edition of our flagship report South East Europe Competitiveness Outlook 2021. While the Outlook’s full scope will be presented in the Western Balkan capitals in the autumn, he shared already three notable achievements and areas that could benefit from further improvement. For more information, see the Chair’s Conclusions.

In the run-up to the Leaders' Meeting, the Ministers of Economy Meeting took place on 30 June. In the opening session of the Ministerial Meeting with the Federal Minister for Economic Affairs and Energy, Peter Altmaier, and the EU Commissioner for Neighbourhood and Enlargement, Olivér Várhelyi, the OECD Deputy Secretary General, Ulrik Knudsen, assured continuous support of the OECD to the Western Balkans in devising policies that ensure sustainable and resilient outcomes. He emphasised three priority areas to foster competitiveness and economic growth in the recovery context, based on the findings of the 2021 edition of the OECD report South East Europe Competitiveness Outlook: (1) to unleash new investment opportunities by improving the business climate for foreign and domestic firms; (2) to accelerate green transition by prioritising green investments and aligning regulations; and (3) to support and enhance the digital transformation by scaling up digital infrastructure and digital skills.

Interventions during the Ministerial Meeting, which also involved business sector representatives (WB6CIF, DIHK) and regional organisations (RCC, CEFTA), focused on creating a sound business environment for investments with the upsurge of near shoring opportunities and the green and digital transition of the Western Balkans in the post COVID-19 crisis context. Participants agreed that the EU Economic and Investment Plan for the Western Balkans and activities for the creation of a Common Regional Market are vital in this regard. Germany announced that they would appoint a Special Commissioner to oversee the implementation of the green agenda in the industrial and energy sectors of the Western Balkans. For more information, see the Chair’s Conclusions.