Network on Agricultural Total Factor Productivity and the Environment

At the same time the agriculture sector must feed a growing global population, it will have to do so while also minimising the stress on natural resources, mitigating the impacts of climate change, and reducing the use of fertilisers and chemicals for environmental reasons.

It is therefore not surprising that increasing agricultural productivity has become a policy priority for a number of countries today. When agricultural productivity increases, resources (including labour and capital) can be released from food production to expand the non-agricultural sectors of the economy; and, in some cases, natural resources like land and water can be used for environmental purposes. Increased productivity, arising from innovation and changes in technology, has long been recognised as the most important source of economic growth in agriculture.

Improvements in agricultural total factor productivity (TFP) are not only important for the viability of the agricultural sector, but are are a fundamental precondition for sustainable economic growth. TFP, also known as multi-factor productivity, is a measure of the increase in outputs not accounted for by growth in production inputs. However, productivity has to be measured in a way that accounts for the environmental effects of economic activity.

Despite its policy importance, there is a lack of consensus among researchers on the most accurate approach for measuring TFP. Existing approaches in various countries show great heterogeneity of what is measured and how it is measured. Much relevant data is missing, and there is little co-odination across countries and statistics-providers in different countries.

Another major shortcoming of conventional measures of economic performance like the TFP is that it accounts only for marketed outputs and inputs, while the environmental impacts of economic activity or the free provision of resources from nature are overlooked. This omission can be a serious source of systematic bias in productivity calculations, and can lead to incorrect policy conclusions.

For example, productivity growth can easily be overestimated in countries where agricultural output growth relies to a large extent on the depletion of natural resources, or where farmers rely on heavily polluting farm practices. While this can generate additional output in the short run, it also generates higher externalities, which can impinge on well-being and the long-term sustainability of the sector. Conversely, the economic performance and sustainability of agriculture in a country that invests in a more efficient use of the environment in production may be underestimated, as some inputs do not serve to increase production, but to reduce negative externalities associated with it.

Objectives of the Network on Agricultural TFP and the Environment

To help address this challenge, the OECD launched a Network on Agricultural TFP and the Environment in 2017, where experts gather together to share experiences and best practices, and aim to develop a framework for cross-country agricultural TFP comparisons. In due course, the ambition is to create a set of “environmentally-adjusted” TFP (EATFP) indicators.

An important part of the network’s activities will be to develop an approach that countries can use to construct productivity accounts for the measurement of TFP and EATFP trends. The OECD acts as a co-ordinator and facilitator to help convene people with common interest.

In the coming years, the Network will continue developing analytical approaches to key issues already identified such as land input and climate change.

Its first expected output would be the development of methodological and practical guidance specific to TFP and EATFP measurement in agriculture, following the OECD’s “Measuring Productivity” Manual. Existing international guidance such as the UN System of Environmental Economic Accounting (SEAA) contains an agricultural component and will be used as a starting point. The manual will be an important resource for countries to use when building a production account for agriculture, and will assist in achieving consistency in approach and data. 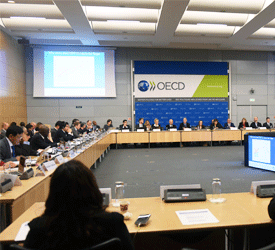 The fifth meeting of the Network on Agricultural Total Factor Productivity and the Environment took place on 27-28 May 2021 via remote conferencing.

All documents, agendas and presentations from the meetings of the Network on Agricultural Total Factor Productivity and the Environment are available for download below.

Access all OECD publications on agricultural productivity on the OECD iLibrary.