21/04/2017 –Today at the OECD Headquarters in Paris, His Excellency Muadid Hareb Mughair Al-Khaili, Ambassador of the United Arab Emirates to France, signed the Multilateral Convention on Mutual Administrative Assistance in Tax Matters in the presence of the OECD Deputy Secretary-General, Rintaro Tamaki. 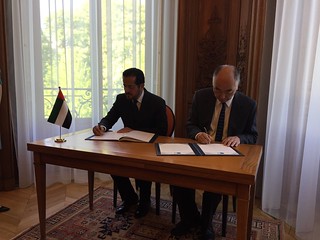 The Convention's impact grows with each new signatory; it also serves as the premier instrument for implementing the Standard for Automatic Exchange of Financial Account Information in Tax Matters developed by the OECD and G20 countries. The Convention will enable the United Arab Emirates to fulfil their commitment to begin the first of such exchanges by 2018.

The 109 jurisdictions participating in the Convention can be found at: www.oecd.org/ctp/exchange-of-tax-information/Status_of_convention.pdf