The OECD Inter-Country Input-Output (ICIO) database, when combined with statistics on CO2 emissions from fuel combustion and other industry statistics, can be used to estimate demand-based carbon dioxide emissions. That is, the distribution across economies of final demand (household consumption and industry investment) for embodied carbon that has been emitted anywhere in the world, along global production chains.

The Trade in embodied CO2 (TECO2) database presents a set of indicators to reveal patterns of CO2 demand compared to CO2 production (via resident industry or household emissions). The aim is to provide policy makers with new insights into the environmental impacts of global production systems.

Indicators presented in TECO2 database include:

Note: In case of issue when downloading, right-click and select "save as".

The six largest producers and consumers countries of CO2 emissions in 2018 were China, United States, India, the Russia Federation, Japan and Germany; the European Union (EU27_2020) is also included for reference. While, since 1995, both production and consumption of emissions have fallen in Japan, Germany and the European Union, there has been a significant increase in China and India. China has the highest absolute emissions from both a demand and a production perspective. However, even though China’s per capita demand for CO2 emissions increased 3 times in 2018, when compared to 1995, US per capita demand in 2018 was still 2.8 times higher than that of China.

Total production and consumption based CO2 emissions by top 6 emitters 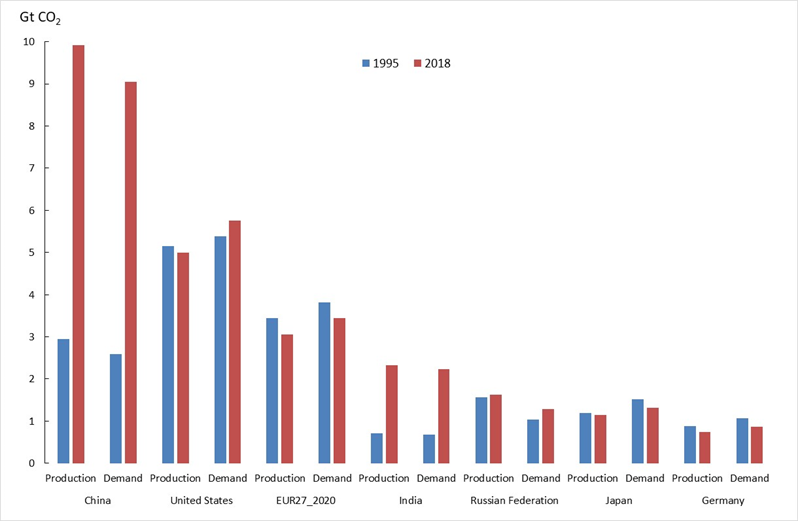 The difference between production-based and demand-based carbon emissions is highlighted in the graph below. While the OECD countries, in total, are net-importers of embodied carbon (the solid blue line representing demand-based emissions is above the dashed blue line representing production-based emissions), non-OECD countries, as a whole, are net-exporters. Note that the shaded blue area (OECD net imports) and green area (non-OECD net exports) have the exact same size, i.e. OECD net-imports are non-OECD net-exports of embodied carbon. OECD net-imports grew from 1995 to reach a peak in 2006 and, ever since, have been gradually declining. 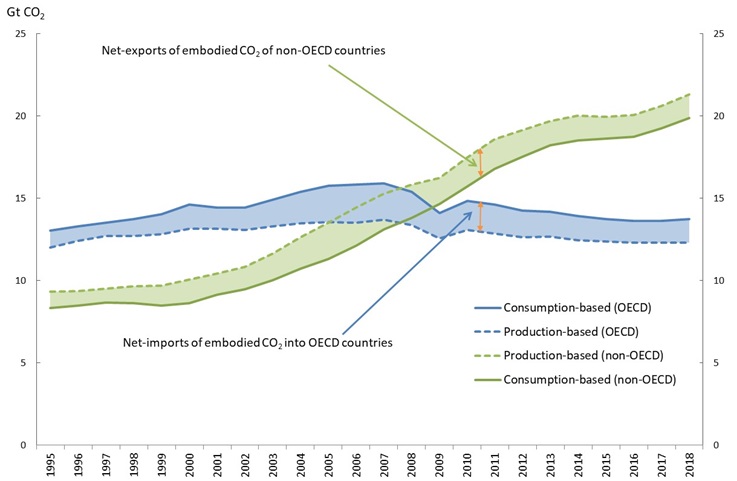 However, not all OECD countries are net-importers of carbon and similarly, not all non-OECD economies are net-exporters. For example, in the OECD area, Canada, Korea, Poland, Turkey, Czech Republic, the Netherlands and Denmark were net-exporters in 2018 while among non-OECD economies, Argentina and Brazil were net importers. Looking at the OECD and G20 countries, the average of the three largest demand-based CO2 emitters per capita (Australia, Saudi Arabia and the United States, 16.7 tonnes CO2) is nearly 8 times higher than that of the top three economies with lowest per capita emissions (Brazil, Indonesia and India, 2.0).

Per-capita production and consumption based emissions in selected countries 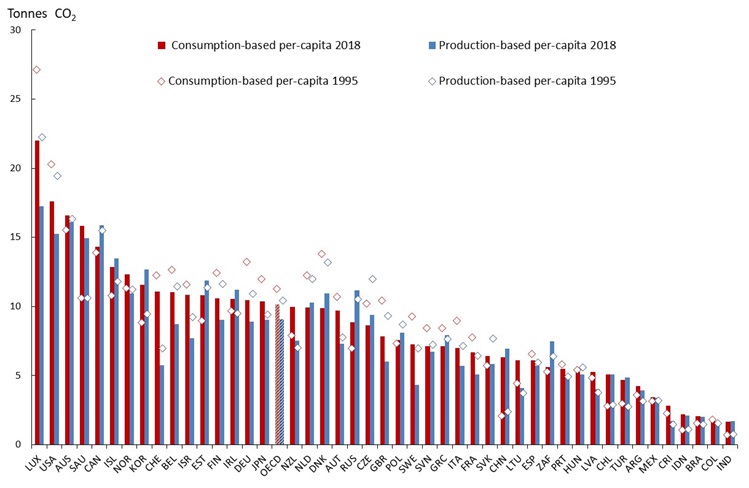 Demand-based emissions are calculated using IEA data on “CO2 emissions from fuel combustion” and the OECD Inter-Country Input-Output (ICIO) system (edition 2021). Using information from both, emission-intensities of production are calculated for each industry in each country. These intensities are then combined with the Leontief inverse of the ICIO system to get emission multipliers for final demand.