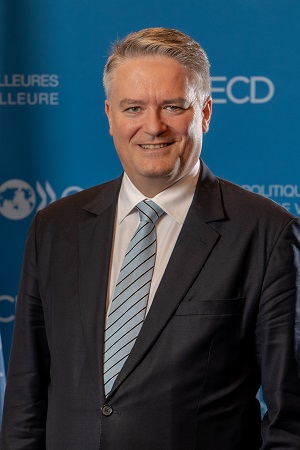 Mathias Cormann is the 6th Secretary-General of the Organisation for Economic Co-operation and Development (OECD).

Working with OECD members, his priorities as Secretary-General are:

Prior to his appointment to the OECD, Mathias served as the Australian Minister for Finance, the Leader of the Government in the Australian Senate and as Federal Senator representing the State of Western Australia.

In these roles, he has been a strong advocate for the positive power of open markets, free trade and the importance of a rules-based international trading system.

Mathias was born and raised in the German-speaking part of Belgium.

He migrated to Australia in 1996, attracted by the great lifestyle and opportunities on offer in Western Australia.

Between 1997 and 2003, he worked as Chief of Staff as well as Senior Adviser to various State and Federal Ministers in Australia and for the Premier of Western Australia.

Between 2003 and 2007, Mathias worked for major Western Australian health insurer HBF in a range of senior management roles.

Mathias grew up speaking German and graduated in law following studies in French, Flemish and English.

He is married to Hayley, a Perth lawyer, and they have two young daughters, Isabelle and Charlotte.