Climate finance provided and mobilised by developed countries for developing countries totalled USD 79.6 billion in 2019, up 2% from 78.3 billion in 2018, according to new figures from the OECD.

Climate Finance Provided and Mobilised by Developed Countries: Aggregate trends updated with 2019 data is the OECD’s fourth assessment of progress towards the UNFCCC goal of mobilising USD 100 billion per year by 2020 to help developing countries tackle and adapt to climate change. 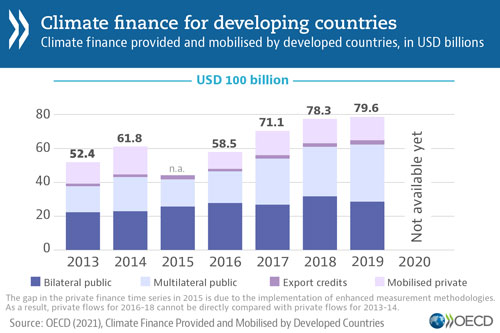 “The limited progress in overall climate finance volumes between 2018 and 2019 is disappointing, particularly ahead of COP26. While appropriately verified data for 2020 will not be available until early next year it is clear that climate finance will remain well short of its target. More needs to be done. We know that donor countries recognise this, with Canada and Germany now taking forward a delivery plan for mobilising the additional finance required to reach the USD 100bn a year goal.”

The report also shows that out of the overall climate finance in 2019, 25% went to adaptation (up from 21% in 2018), 64% went to climate change mitigation activities (down from 70% in 2019), and the remainder to crosscutting activities. More than half of total climate finance targeted economic infrastructure – mostly energy and transport – with most of the remainder going to agriculture and social infrastructure, notably water and sanitation.

This data confirm that SIDS face specific challenges in accessing climate finance. The international community needs to consider financing for climate that is appropriate for the challenges that SIDS face, less fragmented, easier to access, predictable and long-term.

Mr Cormann emphasised that, “It is more urgent than ever that developed countries step up their efforts to deliver finance for climate action in developing countries, particularly to support poor and vulnerable countries to build resilience against the growing impacts of climate change.”

In terms of public finance instruments, public grant financing jumped by 30% from 2018 to reach USD 16.7 billion in 2019, after having remained stable the three previous years. In contrast, the volume of public loans, which had increased significantly up to 2018, fell by 5% in 2019. As a result, the share of grants in overall public climate finance was 27% in 2019, while loans (both concessional and non-concessional) represented 71%.

At the 15th Conference of Parties (COP15) of the UNFCCC in Copenhagen in 2009, developed countries committed to a collective goal of mobilising USD 100 billion per year by 2020 for climate action in developing countries. The goal was formalised at COP16 in Cancun, and at COP21 in Paris, it was reiterated and extended to 2025.

The year-on-year time series is consistent from 2013 to 2019 for bilateral and multilateral public climate finance and export credits, however data for private climate finance from 2016 on are not directly comparable with those for 2013-14 due to the application of improved methodology and a resulting gap in the time series in 2015.