Competition in the global market needs to be fair

Making trade work for all implies that we also address concerns around the world that competition in the global economy is not ‘fair’, that it is distorted by market barriers and government actions that favour companies and products that are not necessarily the best. A level playing field in global trade means that all countries and firms compete on an equal footing to offer consumers everywhere the widest possible choice and the best value for money.

The rules-based multilateral trading system embodied in the World Trade Organization (WTO) has underpinned the growth in global trade, allowing more economies and people to benefit from equal access to global markets. Critically, WTO rules helped to prevent countries from slipping into a 1930s-style trade war that would have greatly exacerbated the 2008-9 global economic crisis. Yet gaps in the rulebook and unfinished business continue to undermine progress towards a more free, fair, and open trading system. And unless more is done to level the playing field, unfair trade practices risk endangering these major achievements.

Many subsidies and other forms of support are used by governments to favour firms – state-owned or otherwise – that they want to keep in business or see succeed in international markets. Where that support enables unprofitable companies to crowd out others that are better performing, then this casts doubts on the fairness of global trade.

Where fairness is questioned, the sustainability of open global trade and investment is at risk. Whether it is rules that ensure that private and state-owned firms compete on the same terms, or that countries are not able to subsidise their own firms or farms at the expense of others, governments have an important role to play in negotiating disciplines that level the playing field in global trade and investment. Much more also needs to be done to ensure that everyone, from companies to countries, plays by the agreed rules.

How is the OECD supporting a more level playing field?

The OECD work in this area aims to support a more free fair and open international trading system by helping governments to understand the extent and implications of government support. We have a long history and experience in measuring government support measures and related trade distortions across a large range of sectors and countries, including in areas such as: government support for agriculture, fisheries, and fossil fuels; policies that restrict exports of key raw materials, such as the rare earths, lithium, and cobalt that feed into smart phones, wind turbines, and electric vehicles; and policies that stand in the way of services trade between countries. More recently, the OECD has begun to expand the measurement of trade distortions and government support to new industrial sectors, starting with the aluminium value chain and the semiconductor value chain.

The most recent work on level playing field examines support that is provided by governments through the financial system, either in the form of below‑market borrowings or below-market equity. To better understand the nature and scale of this support, the report on below market finance uses publicly available information for 306 of the largest manufacturing firms in 13 industrial sectors. 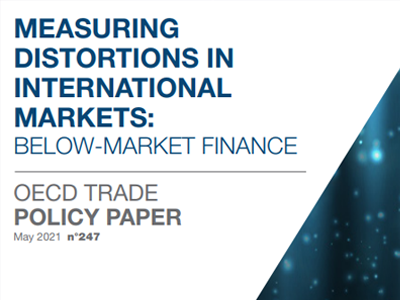 The support that governments provide to their industrial producers has been a growing source of concern. Much of that support is provided by governments through the financial system, either in the form of below‑market borrowings or below-market equity. To better understand the nature and scale of this support, this report uses publicly available information for 306 of the largest manufacturing firms in 13 industrial sectors.

Access all OECD publications on level playing field on the OECD iLibrary.