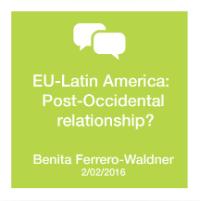 Today more than ever, the European Union and Latin America face the opportunity to advance a post-Occidental partnership. Already, the two regions share the same culture, speak the same language in part and promote the same values and principles enshrined in democracy, the rule of law, human dignity and peace. Such mutual bi-regional respect and tolerance serve as a clear counter-ideology to the surge of extremism and religious fanaticism that we see.

Alain Rouquié, academic, Latin America expert and former French ambassador to Brazil, referred to Latin America as Europe’s “Far West.” Yet, the many changes in the relationship between the European Union and Latin America no longer reflect this definition of the “West.” Thus, building a new enhanced post-Occidental strategic partnership is timely. Indeed, Europe and Latin America could be much stronger allies, politically, socially and economically. What does this mean in concrete terms?

First, consider the political dimension. Achieving a global post-Occidental political relationship between the European Union and Latin America and the Caribbean requires that Europe be more supportive of Latin America’s global aspirations. This, for example, could translate into support for adding new Permanent Members to the Security Council from Latin America, among other members from the South, or in such financial institutions as the World Bank and the International Monetary Fund. Taking this approach earlier could have avoided the establishment of the Bank of the South, which several Latin American countries created. In this spirit, both regions could identify issues where they could jointly work to promote multilateralism, peace, the rule of law, democracy and the principles at the heart of the United Nations Charter, reaffirming their respective roles in the international community while advancing the well-being of their respective populations.

Second, look at the social issues. Starting with the European Union-Latin American and Caribbean Summit in Lima in 2008, both regions realized their shared global social identity.It constitutes an important basis for political and economic co-operation. Nearly all Latin American countries recognise that social inclusion and social cohesion, as Europe practises, are key to improving more balanced development in their countries and mitigating huge social inequalities. Even with significant employment gains, poverty and inequalities persist, and conditions remain challenging for some countries.

Third, the intensification of economic relations also offers collaboration opportunities. The 1999 bi-regional Strategic Partnership created new expectations in Latin America and Caribbean countries regarding economic ties with Europe. Yet, from 2000 onwards, China’s importance as a trading partner for Latin America evolved strongly, precipitating real geo-economic change. China’s economic presence in Latin America today is evident. China has gained the position of one of Latin America’s major export destinations. Yet, in its trade with China, the Latin American and Caribbean region is increasingly dependent on just a few commodities. However, China’s current economic downswing and policy changes that focus more on its domestic market could launch the right moment for a new initiative with the European Union to create this post-Occidental partnership. The high trade compatibility between the European Union and Latin America and the Caribbean could generate significant benefits from tightening bi-regional economic relations, enhancing global value chains and creating jobs in Latin America.

In this changing context, the relationship between Europe and Latin America can become more balanced and strategic, reinforced by dynamic instruments of cooperation that provide answers to challenges and transform them into opportunities. Consider, the most important EU-Mercosur Agreement, which unfortunately is still not in place. For the European Union, a prospective deal with Mercosur would constitute another step towards an even stronger alliance with Latin America.

Similarly, countries in Latin America have consistently tried to overcome prevailing differences among them by improving coordination through such instruments as the Organisation of American States (OAS), the Union of South American Nations (UNASUR) and the Community of Latin American and Caribbean States (CELAC). CELAC’s emergence as a regional co-ordinating mechanism offers a better possibility of co-operating with and benefitting from a bi-regional relationship with the European Union. Additionally, if the Transatlantic Trade and Investment Partnership (TTIP) between the European Union and the United States is concluded, it would be crucial to open it up to Latin American countries. If Europe championed this opening and managed to make it happen, it could create the “Renaissance” of a stronger partnership and deepen mutual trust between the two regions.

While these political, social and economic factors could form the basis for a new post-Occidental alliance, such a region-to-region partnership will not necessarily be easy because of Latin America’s great heterogeneity. Many questions remain about the form of future relations between the European Union and Latin America and the Caribbean and how these relations will develop. Nevertheless, the sooner we maximise the benefits of our common philosophy and attitude in political, social and economic matters that make us stronger together the better.