Ending hunger and malnutrition is among the greatest challenges humanity faces. A person is considered “food secure” when he or she has the physical, social and economic access to sufficient, safe and nutritious food that meets his or her dietary needs and food preferences for an active and healthy life (as defined by the United Nations Committee on World Food Security).

Over the years, much progress has been made to improve food security, with global undernourishment halved between 1992 and 2017 from 23% to 11% of the world population. But improvement has been uneven across countries and regions, and significant challenges remain. According to estimates by the UN Food and Agriculture Organization, over 800 million people worldwide remain food insecure today.

Challenges to achieving food security will be compounded by a growing world population with an increasing appetite for meat and fish, alongside demands from competing agricultural products such as cotton and biofuels. The impact of climate change and the rise in extreme weather conditions will further challenge producers, as crops are destroyed and production has to shift to new regions, creating short-term fluctuations in food availability.

But governments can act to increase food security, and in the face of these challenges, policy choices matter.

Food security is not only about the availability of food, but also about better access to food

While short-term intervention can be important to address the immediate needs of the most vulnerable (emergency food aid, for example), policy efforts must also focus on sustainable solutions to build medium- and long-term resilience to food supply shocks for those people currently afflicted by chronic hunger and food insecurity.

The root cause of most food insecurity today is poverty. Globally, there is enough food available to feed everyone, but many people are too poor or have inadequate incomes to afford it. As such, increasing the incomes of the poor and tackling development challenges for countries are critical elements for achieving global food security. But policies may also be needed to ensure that higher incomes translate into improved nutrition, including polices focused on health, education, social protection and infrastructure.

That said, it is important to look at the specific role of agricultural policies, in particular given that many agricultural policies are maintained with the stated aim of increasing food security. In many countries, market interventions in the agriculture sector (such as subsidies or export restrictions) are often aimed at promoting food security through self-sufficiency in food production. However, these policies often result in higher prices for staple foods, with a negative impact on the food security of poor households (which can include poor farmers who may be net consumers of such crops).

Many support policies not only fail to achieve their aim, they can also divert public resources away from actions that could tangibly contribute to improved food security. These includes efforts to create a stronger enabling environment for agricultural productivity or to develop agricultural innovation systems to boost productivity growth. Other investments that support improved food production and availability include rural infrastructure and storage facilities, and appropriate training and advisory services. Strong and effective systems to build resilience and risk management capacity in agriculture production are also critical in helping build food security at the national and global levels.

Food security is also about ensuring that food is available where it is needed. Some parts of the world are better endowed than others in terms of climate, soil, water and geography – and climate change will make trade even more crucial for food security, as agricultural production conditions deteriorate in some parts of the world and volatility in production worsens. Enabling households to access the quantity, quality and variety of nutritious foods they need for a healthy and fulfilling life requires open, predictable, non-discriminatory and fair international conditions for trade in agriculture and food. Exposure to world market prices (which are generally more stable than domestic markets prices) can also reinforce market signals to encourage production to occur in areas where it is most efficient to do so.

The urgent need to address global food security is rightly recognised in the UN Sustainable Development Goals (SDGs). SDG2 sets targets to end hunger, achieve food security, improve nutrition, and promote sustainable agriculture by 2030. These are critical challenges for the world, and they are not challenges that any one country can solve alone. They will require not only renewed efforts to improve domestic policies, but also renewed efforts to strengthen international co-operation to ensure that investments in better production can be made, and food can move to where it is needed around the globe. 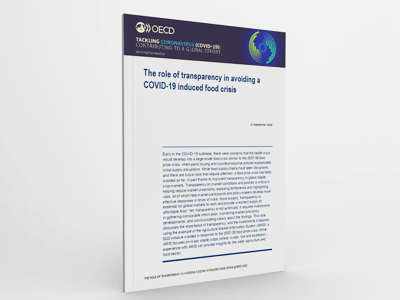 Early in the COVID-19 outbreak, there were concerns that the health crisis would develop into a large-scale food crisis similar to the 2007-08 food price crisis, when panic buying and counterproductive policies exacerbated initial supply disruptions. While food supply chains have seen disruptions, and there are future risks that require attention, a food price crisis has been avoided so far, in part thanks to improved transparency in global staple crop markets.

Access all OECD publications on food security on the OECD iLibrary.