The changing landscape of agricultural markets and trade

Trade plays a crucial role in delivering food and clothing to consumers worldwide. It helps to provide greater choice in consumer goods, and has played a role in reducing food insecurity across the globe.

Over the past decade, international agricultural and food markets have witnessed a number of changes, which have brought domestic and international markets closer together. Since 2000, trade in agro-food products has grown strongly – more strongly than in the preceding decade at close to 8% in real terms annually between 2001 and 2014 compared to 2% between 1990 and 2000 – as world markets responded to a more rules-based trading environment, falling tariffs, and reductions in trade-distorting producer support. Global agricultural production has also continued to increase, driven by rapid growth in a number of developing regions, in particular those of Asia and South America.

But agro-food trade isn’t just increasing, it’s becoming ‘global’. The food and clothing that consumers find in their local stores are increasingly made from a wider range of products, produced in a wider range of locations across the globe. Among the changes seen in agro-food markets, there has been a significant increase in trade among emerging and developing countries, which are increasing in importance, both as suppliers and markets for agro-food products. Increasing trade has also been accompanied by deeper integration of the world’s food system. A growing share of agro-food trade is taking place in global value chains (GVCs) – agricultural and food processing value chains that are spread over several countries – linking agro-food sectors and other sectors of the economy from across the world.

While international agro-food markets have evolved, most countries continue to provide support and impose barriers through measures that distort trade and limit the benefits that international agro-food markets can deliver for consumers. These measures continue to have significant and negative effects on the welfare, resilience and food security of consumers and producers, as well as on agricultural sustainability, and also reduce agricultural and food trade volumes. And while an objective of many trade and domestic support policies is to increase food production, there is little evidence that they achieve this goal: global agricultural and food production would be higher if distorting support was removed.

New and closer linkages between agricultural and food sectors, and between these and other sectors of the economy, mean that the impacts of trade and domestic support measures are transmitted more widely. Globally, around 24% of agro-food export value comes from imported inputs: industrial inputs (machinery and fertiliser) and services, as well agriculture and food. Trade policies that act as barriers to imports directly reduce the competitiveness of a country’s own agro-food exports by raising input costs.

Other measures that affect the flow of agro-food products across borders can also reduce trade. Non-tariff measures (NTMs) – those related to laws, regulations and requirements such as sanitary and phyto-sanitary measures (SPS), technical barriers to trade (TBT) and customs procedures – can increase trade costs. Since agro-food products in GVCs may cross borders multiple times before reaching final consumers, those trade costs can have significant ripple effects and are most problematic for smaller businesses. While NTMs are in place to achieve legitimate regulatory goals, they can restrict trade depending on how they are designed and enforced.

The greatest benefits from reform come when everyone acts together

With regions and sectors becoming more globally connected, countries at all stages of development have a greater common interest in ensuring that international agro-food markets are free from distortions.

The gains from reform are greatest when all countries – developed and developing – act together to reduce trade-related and domestic support. Developed countries benefit from lower prices for their consumers and production shifts towards more efficient sectors. For some countries, the gains largely come from reforming their own distorting policies.

As the distorting effects of tariffs and domestic support are reduced, the potentially trade-reducing effects of NTMs will become more apparent. The trade impacts of such measures can be reduced by removing unnecessary costs that may arise from poor design or implementation.

In sum, policies matter for the gains from agro-food trade

At the OECD, we analyse the impacts of trade and agricultural policies to assist countries in making informed policy decisions that will help make agro-food trade work for all. Countries’ policies that restrict trade or unnecessarily increase trade costs harm their own domestic economies as well as their trading partners, by constraining the development of the agro-food sector.

To enhance the gains from trade for agro-food sectors, countries should reduce their own distorting domestic support and their trade measures,such as tariffs. By increasing the cost of inputs, these policies reduce export competitiveness and can constrain a country’s ability to participate in agro-food GVCs.

Well-designed regulations can help build trust and support trade, so countries should also ensure that NTMs, including SPS and TBT measures, are appropriate, transparent, and well-founded in science – all ways to ensure that they do not unnecessarily restrict trade.

Finally, government policies have an important role in providing an enabling environment that can promote agricultural productivity growth and enhance the competitiveness of agro-food exports and participation in GVCs through appropriate investments in key areas such as transport infrastructure, education and research & development. 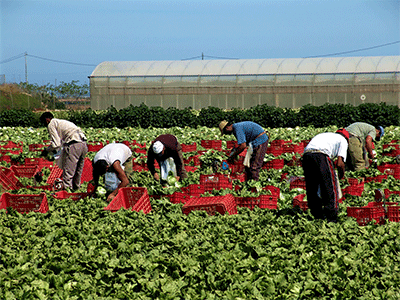 Access all OECD publications on agricultural trade on the OECD iLibrary.