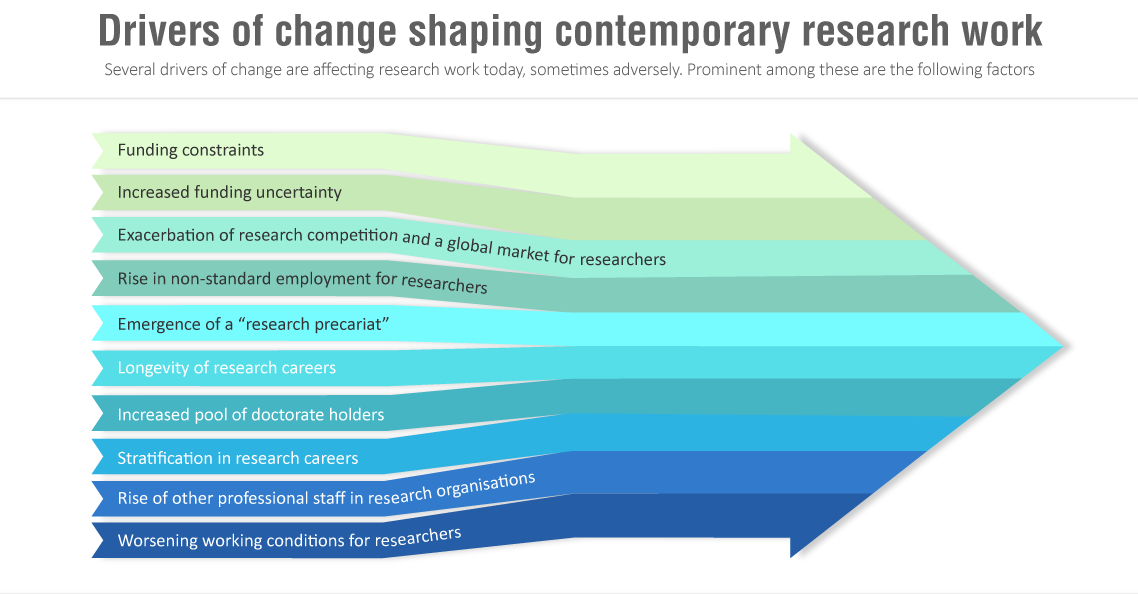 Public expenditure on research across the OECD declined after the financial crisis of 2007-2009 and has remained flat in many countries since then (Read Effective operation of competitive research funding systems). Until recently, the situation was not expected to improve, as OECD populations are becoming older, increasing the old-age dependency ratio, which will contribute to further demands on public budgets to fund health, long-term care and pensions (Read Society at a Glance 2019: OECD Social Indicators). The effects of the coronavirus disease 2019 brings further uncertainty regarding funding priorities for research.

Exacerbation of research competition and a global market for researchers

Competition for funds puts a premium on researchers that can demonstrate high performance against easily measured indicators, such as citations, articles in highly cited journals, and ability to attract research funds.  Research has internationalised, with English as its lingua franca, and mobility of staff, mostly from south to north and from east to west, in search of better opportunities and infrastructure, is widespread. The mobility of researchers is thought to play an important role in raising the quality of research as measured using bibliometric indicators (Read OECD Science, Technology and Industry Scoreboard 2017: The digital transformation), although it is not clear if correlation indicates causation. Mobility may improve performance, but it is equally likely that the best researchers are more mobile, or that a major effect of mobility is to enhance citation network effects. All these factors result in the emergence of a competitive global market for researchers.  Nonetheless, there are also countervailing trends to internationalisation. A rise in anti-immigrant movements, with some countries introducing stringent visa requirements, restrictions on academic freedom, and anti-globalism, may have implications for the internationalisation of research careers, decrease the opportunities for some, and impair the flow of scientific talent to some countries.

Rise in non-standard employment for researchers

These trends are having an impact on research careers, with an increase in the number of researchers in non-standard forms of employment, i.e. those not in a standard employment relationship, understood as work that is full time, indefinite, as well as part of a subordinate relationship between an employee and an employer.  The types of standard employment in research careers will vary between systems, but typically include those permanently employed (e.g. tenure), continuously employed with no pre-set term, or those that although they are in fixed term employment, have prospects to transition to either permanent or continuous employment, should they attain a priori defined performance objectives (e.g. tenure track assistant professor).  Thus, non-standard employment means fixed-term and without permanent or continuous employment prospects.

Emergence of a “research precariat”

The growth of non-standard employment is not specific to research careers.  Around a third of the OECD labour force are in temporary, part-time and self-employment (Read Preparing for the Changing Nature of Work in the Digital Era). However, many countries are experiencing the emergence of a striking dual labour market, with the coexistence of a shrinking protected research elite and a large precarious academic class that is now in the majority in many systems. Some are equating this class to an “academic proletariat”, thus the emergence of the expression “research precariat” (Read Challenges and Options: The Academic Profession in Europe).

The longevity of the general workforce also has an impact on research careers.  More people are living and working to retirement age, and beyond traditional retirement age, where mandatory retirement has been lifted. Many of those over 65, the threshold commonly used to calculate the so-called “old-age dependency ratio” (Read Higher Education to 2030, Volume 1, Demography), will in fact be in good health and continue working, especially knowledge workers.  In the case of research systems, this may mean that the rate at which new doctorate holders are seeking to join the research workforce is much higher than the rate at which older doctorate holders are exiting, further narrowing the bottleneck of the transition from postdoctoral researcher to a regular research position.

High-participation systems of higher education, which are the norm across OECD countries, may have reached saturation levels in some countries.  The “massification” of higher education is not only due to workforce demand but is fundamentally driven by the search for social status and cultural capital from those participating (Read The Journal of Higher Education). When participation becomes an almost universal obligation for middle class families, the rise of “credentialism”, i.e. the perception that a degree credential is needed to succeed in life, may extend to postgraduate levels of education, including the doctorate, as a form of maintaining elite status for some groups.  The number of doctorates awarded, and thus those trying to join a research career, may be disproportionate to the availability of positions in research systems, further diminishing the collective bargaining capacity of researchers and exacerbating the precarity of early career researchers.

The “massification” of higher education has resulted in the horizontal diversification of institutions with different institutional missions and profiles (e.g. research universities vs universities of applied sciences), but there is also an element of vertical differentiation, i.e. hierarchies based on prestige. Although elite systems have virtually disappeared across OECD countries, the same is not true of elite institutions. Stratification tends to increase in high participation systems, as institutions compete with each other for status, in a context where rankings have become very important, and where governments concentrate funding, especially research funding, in a few “world-class universities (Read Rankings and the Reshaping of Higher Education. The Battle for World-Class Excellence). One consequence for academic careers has been the decoupling of teaching and research activities.  The tenured academic who combined teaching and research activity is now in the minority in some systems, as the long term funding associated with core resource allocation has steadily been replaced by project funding with short time frames. Institutions rest their research prowess on a few tenured star researchers that head teams populated by postdoctoral and doctoral researchers that feed the research endeavour.

Rise of other professional staff in research organisations

The more competitive environment faced by academic research organisations, coupled with their high degree of autonomy from government control, has also incited the development of more entrepreneurial institutions in some systems. These are similar to market-facing institutions that need a cadre of professionals to procure project-based funding and manage complex research projects, which are often multi-national and multi-site. These professionals market their activities to potential funders, and deal with the pressures of accountability to funders, such as performance assessment exercises.  In the higher education sector, there are increasing numbers of professional and managerial staff, and academic staff are now in the minority in some countries (Read Professional and support staff in higher education). The development of a cadre of specialist support services and management structures will likely mean these groups have an increasing voice relative to the academic research core, resulting in a decreasing capacity of researchers, especially early career researchers, to bargain for better working conditions.

These contextual factors are leading to the rapid worsening of the working conditions of postdoctoral researchers in many places. The postdoctoral apprenticeship stage between the awarding of the doctorate and finding a permanent position was meant to be transitional, and provide opportunity for further professional development. It has become longer and more arduous, as the bottleneck between non-permanent and permanent positions has become tighter. The continuous struggle to enter the academic research career, in an environment of heightened competition, leads to a regime of long hours, severe dependency on senior researchers, lack of recognition and visibility for work performed, stress caused by job-insecurity and job dissatisfaction, constraints on academic freedom (which was the original rationale for the tenure system), and deterioration of physical and mental wellbeing.