The Roundtable was established in 2007 and it builds upon a long tradition of policy dialogue and publications on urban issues at the OECD.

Co-hosted by the OECD and Mexican authorities – the Ministry of Agrarian, Urban and Territorial Development (SEDATU), the National Workers’ Housing Fund Institute (INFONAVIT) and the Government of Mexico City – the Sixth OECD Roundtable of Mayors and Ministers convened leaders from 16 countries and 24 cities from both national and local governments to discuss policies for more resilient, inclusive cities in an increasingly urbanising era. The Roundtable was preceded by the presentation of the OECD Metropolitan Review of the Valle de México on October 15, 2015. 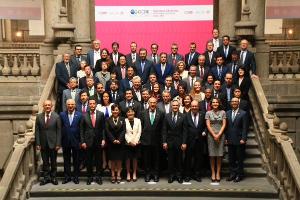 The Fifth Roundtable was held back-to-back with the Third TDPC Ministerial Meeting. The Roundtable focussed on how national governments and cities can better work together to foster growth and well-being. Discussions focussed on mobilising investment in hard and soft infrastructures, fostering innovation and strengthening environmental sustainability, financial resilience and social inclusion.

The Fourth Roundtable which focused on financing and investing in urban sustainability, job creation, and resilient growth as a catalyst for economic recovery. Participants examined innovative investment options and finance models to meet these objectives as well as look at the role of key sectors and partnerships that drive change.

The Paris Roundtable confirmed the important role cities can play in fostering green growth, as well as the need for national policies to enable, encourage and evaluate the progress of local and regional initiatives. The local and national leaders at the Roundtable helped to strengthen the exchange between national and city-level governments, which will be of primary importance in solidifying economic recovery and tackling global concerns such as climate change.

The Milan Roundtable assessed the key institutional challenges to multi-level governance on climate change, and how local and national governments and other stakeholders could work together most effectively to implement climate change policy actions at the city level.
www.oecd.org/cfe/urbandevelopment/milanconference

The Madrid Roundtable helped to set the basis of a new international policy dialogue among city mayors and national government representatives, who examined the future of urban policy in the context of globalisation and the growing challenges for cities.
www.oecd.org/cfe/urbandevelopment/madridconference