When policymakers talk about “trade facilitation”, they are referring to a specific set of measures that streamline and simplify the technical and legal procedures for products entering or leaving a country to be traded internationally. As such, trade facilitation covers the full spectrum of border procedures, from the electronic exchange of data about a shipment, to the simplification and harmonisation of trade documents, to the possibility to appeal administrative decisions by border agencies.

In a globalised world where goods often cross borders many times as both intermediate and final products, trade facilitation helps lower overall trade costs and increase economic welfare, in particular for developing and emerging economies.

In 2013, members of the World Trade Organization (WTO) finalised negotiations of the WTO Trade Facilitation Agreement (TFA), which set multilateral rules that seek to address specific procedural hurdles in order to facilitate trade procedures. The TFA entered into force in 2017, and represents a significant opportunity for countries to reap the economic benefits from improving the speed and efficiency of border procedures.

Whether exporting or importing goods, trade facilitation benefits all countries by allowing better access for businesses to production inputs from abroad and supporting greater participation in global value chains (GVCs). Countries where inputs can be imported and exported in a quick and reliable manner are also more attractive locations for foreign firms seeking to invest and offer consumers lower prices, higher quality products, and a greater array of goods.

Trade facilitation also helps more – and smaller – firms participate in trade. Addressing unnecessary costs related to trade procedures is essential for firms to take full advantage of new market openings. This is specially true for micro-, small- and medium-sized enterprises (SMEs), for which the costs of trading can be disproportionately large.

Finally, not only does simplification of trading procedures promote economic efficiency, but it also removes incentives and opportunities for border-related corruption, thus supporting good governance and integrity.

To help governments improve their border procedures, reduce trade costs, boost trade flows and reap greater benefits from international trade, we have developed a set of trade facilitation indicators (TFIs) that identify areas for action and enable the potential impact of reforms to be assessed. The OECD TFIs cover the full spectrum of border procedures for more than 160 economies across different income levels, geographical regions, and levels of development. Each TF indicator is composed of several specific, precise and fact-based variables related to existing trade-related policies and regulations and their implementation in practice.

Using trade cost estimates from the UN ESCAP-World Bank International Trade Costs Dataset, we can assess the potential impact of implementing measures included in the WTO Trade Facilitation Agreement. With this approach, our analysis finds that the TFA could reduce worldwide trade costs by between 10% and 18%, varying across country groupings, but with the largest gains accruing to countries in the lower income groupings.

The OECD TFIs also allow countries to identify their strengths and weaknesses in trade facilitation, prioritise areas for action, and mobilise technical assistance and capacity building in a more targeted way. The TFIs not only measure the actual extent to which countries have introduced and implemented trade facilitation measures in absolute terms, but also their performance relative to others, using a series of quantitative measures on key areas of the border process.

The data underpinning the OECD TFIs are updated every two years, which allows countries to monitor their progress since 2013, when the project was first launched.

You can learn more about trade facilitation in your country by using our compare your country tool, where you can also compare the performance of various countries or groups of countries as well as visualise worldwide progress across specific trade facilitation areas. Our policy simulator tool in turn lets you discover the key measures driving the performance of a selected country in a specific indicator and simulate the effects of potential policy reforms on the overall performance.

For an in-depth look at the OECD’s body of work on trade facilitation, head to the OECD iLibrary to read our latest research on Trade Facilitation and the Global Economy. 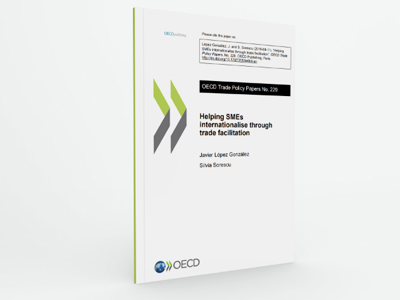 Drawing on cross-country data from the World Bank Enterprise Survey (WBES), together with the OECD Trade by Enterprise Characteristics (TEC), this paper looks at the relationship between the trade facilitation environment – as measured through the OECD Trade Facilitation Indicators (TFIs) – and various measures of international engagement of SMEs.

The compare your country tool allows you to access individual country profiles that provide an overview of trade facilitation performance. The tool offers a dynamic comparison of a selected country with other countries around the world. You can also visualise progress made by the selected country across all TFI areas.

The eleven TFIs take values from 0 to 2, where 2 designates the best performance that can be achieved. The variables in the TFI dataset are coded with 0, 1, or 2. These seek to reflect not only the regulatory framework in the concerned countries, but delve, to the extent possible, into the state of implementation of various trade facilitation measures. The methodology note provides an overview of how the indicators are built and details the data collection process.

Access the books and papers in which we detail our analysis and underlying data on the OECD iLibrary.