Greater international cooperation is needed to improve information and analysis on subsidies and their impact, which would in turn inform efforts to strengthen subsidies disciplines and reduce trade frictions arising from their use.  That is the key conclusion from a new joint report issued on 22 April by staff teams from the International Monetary Fund, the Organization for Economic Cooperation and Development, the World Bank and the World Trade Organization.

The report, Subsidies, Trade and International Cooperation, cites the importance of broad-based international cooperation on subsidies in order to bring greater transparency, openness, and predictability to global trade.

The report notes that subsidies appear to be widespread, growing, and often poorly targeted at their intended policy objectives. Beyond raising economic efficiency concerns, this situation is spurring the use of unilateral trade defense measures, eroding public support for open trade, and contributing to severe trade tensions that impede progress on other global trade priorities.

Governments should work expeditiously to clarify and strengthen international disciplines around subsidies while recognizing the important roles that well-designed subsidies can play in some circumstances.

The joint staff team report cites good reasons for stepping up international cooperation at this time.  The renewed drive toward industrial policies to promote “strategic” sectors may distort international competition, especially against smaller, fiscally constrained developing countries. In addition, with the frequency and complexity of distortive subsidies increasing, even as the need grows for active policies to address climate, health, food, and other emergencies, subsidies and the subsidies debate have brought significant discord to the trading system.

One major message from the report is that information on subsidies overall is weak.

With the exception of agriculture, most data available for a broad scope of countries and sectors…have important shortcomings, according to the report. Evidence on the scope and scale of government support in industrial sectors in particular remains relatively scarce. Additionally, while many subsidy programs are related to services, comprehensive data on their nature and extent are lacking.

The report argues that existing international rules provide a strong basis for regulating subsidies for goods, including the WTO Agreement on Subsidies and Countervailing Measures and the WTO Agreement on Agriculture. Many major countries also adhere to the disciplines of the OECD Export Credit Arrangement.

Nevertheless, both longstanding and recently-exposed gaps remain in these international rules.  Extensive trade-distorting domestic farm subsidies are still allowed in many cases, and WTO members have yet to agree special disciplines for harmful fisheries subsidies that contribute to overfishing.

Developments such as the emergence of global value chains, digital markets and related network concentration effects, the global importance of economies in which the state plays a central role, the urgent challenge of climate change, and the recognition that well-crafted subsidies can be an important part of the public response to economic and health emergencies make the issue of subsidies in the trading system both more complex and more urgent.

In many of these areas, better information, more extensive objective analysis, and regular dialogue can help governments accelerate reform of their own subsidies and expedite negotiations toward improved international disciplines. The IMF, OECD, World Bank and WTO are examining ways to help in this effort, such as by collecting, organizing, and sharing data, coordinating analytical work agendas to develop methodologies to assess the cross-border effects of different forms of subsidies, and supporting inter-governmental dialogues.

A key message of the report is that improved transparency and analysis, more robust inter-governmental consultation, and strengthened international rules can be expected to reduce the use of harmful subsidies and to improve their design—leading to better outcomes with fewer negative effects at home or abroad.

The OECD plays a leading role in bringing transparency to subsidies and government support, with extensive and longstanding experience in measuring and analysing support across sectors. 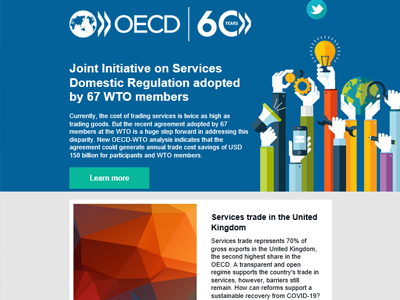 Sign-up to our newsletters to receive regular updates about new data, analysis, and events right in your inbox.