The past year has seen some important milestones in the trade sector to support women’s economic empowerment. The Informal Group on Trade and Gender was formed at the WTO to further the aims of the Buenos Aires Joint Declaration on Trade and Women’s Economic Empowerment. Many of the bilateral trade agreements that have been negotiated and recently entered in force include gender-specific provisions. Women are now well-represented in trade leadership in international organisations. The WTO, World Bank, ITC and the OECD have released major analytical publications on trade and gender.

In the same year, Ministers responsible for Trade from Canada, Chile and New Zealand signed the Global Trade and Gender Arrangement (GTAGA) an innovative and comprehensive initiative addressing gender in trade. The Arrangement aims to “promote mutually supportive trade and gender policies and unlock new opportunities to increase women’s participation in trade as part of broader efforts to improve gender equality and women’s economic empowerment.”

For those interested in supporting women’s empowerment in and through trade, this webinar will provide a unique opportunity to learn from those having made a major step in this direction. 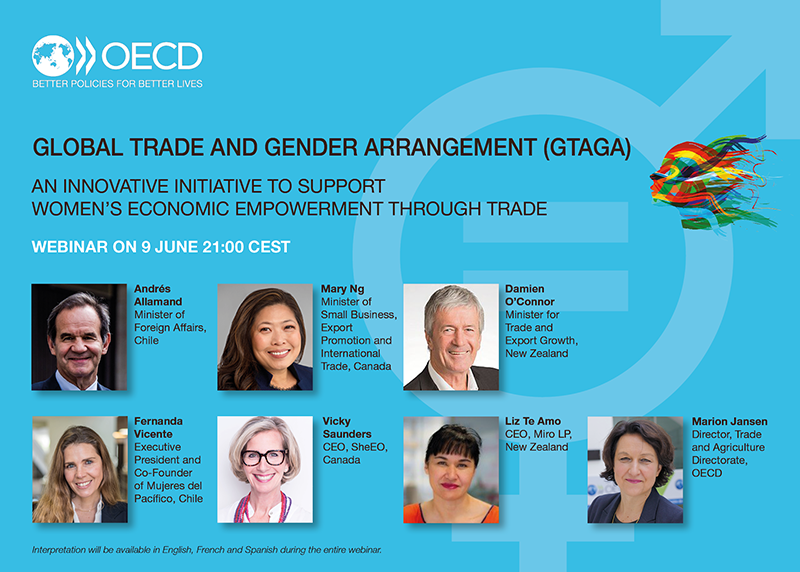 Participants may send their questions before or during the webinar to jane.korinek@oecd.org. For questions regarding participation and registration, please contact aurelia.nicault@oecd.org.