For cases received as from 1 January 2016 or 1 January of the year of joining the BEPS Inclusive Framework (IF membership), the computation rules are set in the agreed reporting framework as follows: 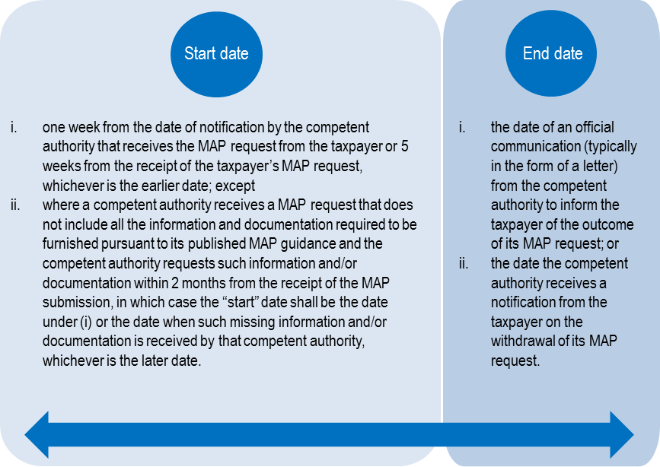 Note: The application of these computation rules may result in negative numbers. This can for example be the case when a MAP case is closed before the theoretical start date computed further to these rules. It was agreed to replace such negative numbers by a "nil" timeframe to avoid biasing the average timeframes. Therefore, there may be instances where the reported timeframe is "nil".

For cases that started before 1 January 2016 or 1 January of the year of joining the BEPS Inclusive Framework (IF membership), the total average time to close MAP cases from start to end is available. Such information is available per type of MAP cases (i.e. transfer pricing cases and other cases).

For cases that started as from 1 January 2016 or 1 January of the year of joining the BEPS Inclusive Framework (IF membership), more information is available, being:

This information is reported by each reporting jurisdiction per type of cases and per treaty partner or per category of treaty partners.