Following a Declaration of intent and a Memorandum of understanding to co-operate in tax matters earlier this year, Mr. Mikayel Pashayan, Deputy Chairman of the State Revenue Committee, and Mr. Paolo Valerio Barbantini, Deputy Director General of the Italian Revenue Agency, signed work plans launching two TIWB capacity building programmes which will be delivered by the end of 2020. The Italian experts will work closely with Armenian tax officials on current audit cases to transfer knowledge, best practices and skills.

During the signing ceremony, Mr. Mikayel Pashayan and Mr. Paolo Valerio Barbantini both agreed on the importance of bilateral co-operation between the two tax administrations to fight tax evasion and ensure large companies pay their fair share of taxes. 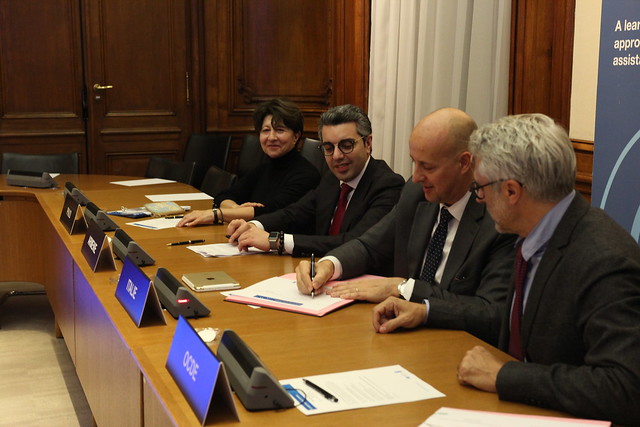 Mr. Paolo Valerio Barbantini highlighted "International co-operation in tax matters is the best way to strengthen tax administrations capabilities to tackle tax evasion and tax fraud in order to secure the taxable base of our countries and to prevent base erosion and profit shifting."

Mr. Mikayel Pashayan stated: "Today we have taken a significant step to strengthen international co-operation, which is carried out with the support of the OECD and UNDP. This is an important basis for enhancing our future co-operation and we expect that it will lead us to build an even more sound tax system. I appreciate the value of the co-operation with the Italian Revenue Agency as partner administration and strongly believe in the success of our collaboration."

Mr. Pascal Saint-Amans, Director of the OECD Centre for Tax Policy and Administration, added: "We are delighted to provide a practical boost to Armenia's ongoing efforts through TIWB to address tax base erosion and profit shifting and illicit financial flows to raise revenues for development."

Technical missions for both programmes are set to take place early next year.

Media enquiries should be directed to: