Sweden’s economy is resilient and growing strongly, but must address rising challenges

8/2/2017 - The Swedish economy is growing strongly, with unemployment trending downward and living standards among the highest in the world. Maintaining today’s high levels of well-being and addressing new challenges will require further actions to ensure inclusive, resilient and green growth for all, according to a new report from the OECD. 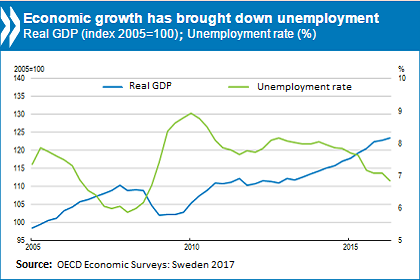 The 2017 OECD Economic Survey of Sweden commends the authorities for their sound macroeconomic management and calls for a continuation of prudent fiscal policy.

“Sweden has enjoyed a solid economic performance in recent years, with growth out-pacing both the major advanced economies and its Nordic neighbours,” Mr Gurría said. “The high share of people with a good job, combined with its strong system of social protection, makes Sweden a model of inclusive growth. At the same time, reforms have allowed Sweden to adapt swiftly to an increasingly competitive and rapidly changing world economy. Notwithstanding these successes, new challenges will require additional efforts to preserve the welfare model, protect the vulnerable and foster greater social cohesion.” (Read full speech)

The Survey points out that housing prices have soared, and are now among the highest in the 35-member OECD. Household indebtedness has risen in tandem, while the lack of affordable housing has worsened both inequality and labour mobility. A comprehensive reform package is therefore needed. This should include efforts to limit household debt, such as a cap on household debt-to-income ratios; reforms to the recurrent property tax, to better align tax charges with property values, combined with a phase-out of the deductibility of mortgage interest payments; enhanced co-operation between central and local government in land-use planning and simplified land-use procedures; and an easing of rental regulations to incentivise rental housing supply, mobility and a better utilisation of the housing stock.

While income inequality in Sweden remains among the lowest in the OECD, it has been rising since the 1990s. Decades of slow benefit increases were partly intended to strengthen work incentives, but have also left recipients behind the rest of the population. An annual analysis of the distributional consequences of different revision scenarios would highlight the consequences of inaction, but leave actual increases to political decision-making, so that equity, fiscal cost and work incentives can be taken into account.

Strong immigration in recent years, including the inflow of asylum seekers, has created both opportunities and challenges for Sweden. Continuing the simplification of procedures that allow immigrants to obtain residence and work permits is critical to harnessing their economic potential, but more can be done to ensure better immigrant employment outcomes and ward against worsening inequality.

Further incentives to better split parental leave between parents and policies to fight stereotypes in education and support women entrepreneurship could boost women’s careers and reduce the gaps between genders in pay and power.

An Overview of the Economic Survey, with the main conclusions, is accessible at www.oecd.org/sweden/economic-survey-sweden.htm.