On 8 March, International Women’s Day, the OECD Sahel and West Africa Club Secretariat in collaboration with the OECD Development Centre will launch a report on the impact of social norms on West African economies.

The Social Institutions and Gender Index (SIGI) in West Africa looks at how formal and  informal laws, social norms and practices restrict the access of women and girls to equal rights, justice, employment opportunities and resources across 17 West African countries. It also looks at how putting social norms change at the core of policy responses can favour gender equality and broaden development outcomes. The challenge for policymakers and citizens is to create an environment that enables change in social institutions and allows West African women and men to benefit equally from development opportunities and economic growth.

Key results from the report include: 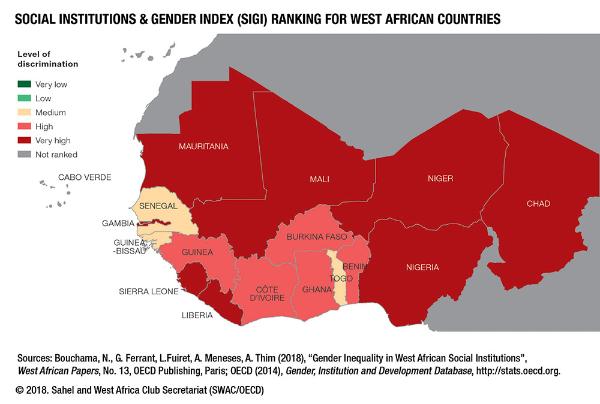 Putting gender equality at the centre of policies is a long-term investment that will bear high social and economic returns. Governments can effectively achieve gender equality and encourage women’s and girl’s empowerment by: implementing legal reforms; putting social norms change at the heart of gender policy and dialogue; recognising that equal access to education for women and girls is a basic human right and a fundamental step for building more inclusive, sustainable and prosperous societies; and strengthening the data and evidence-base on discriminatory social institutions.