Innovation expenditures in Italy appear significantly below the OECD average. In 2007, total R&D amounted to only 1.1% of GDP, a half of the G7 average (2.2%). Italian businesses finance only 40% of total R&D expenditures, against an average of 53% for OECD countries. Participation of business in university and public research activities is the second-lowest among G7 countries whereas government financing of business R&D is above the OECD average. The level of venture capital is among the lowest in the OECD. 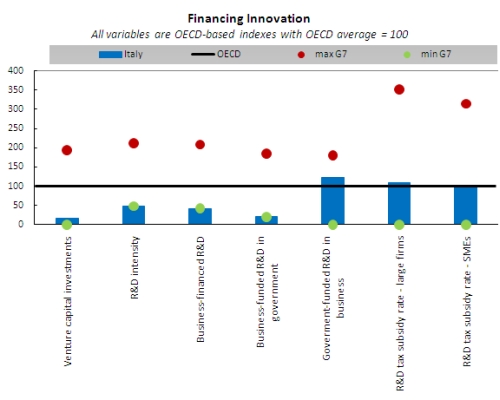 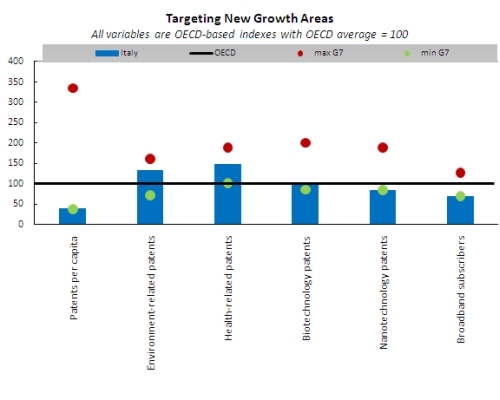 Over 1998-2008, the rate of labour productivity growth in Italy (0.4%) was the lowest among OECD countries. In 2007, the trade balance for high technology goods, including ICT goods, showed a significant deficit (-3.2% of manufacturing trade).

Compared to the OECD, Italian firms do little use of e-commerce, both for selling (3%) and purchasing (12%). The number of new trademarks per capita - an indicator of new products and new marketing methods - was also lower (37 per million inhabitants) than the OECD average (62).

Both the inflows and the outflows of foreign direct investments remained low in 2008. 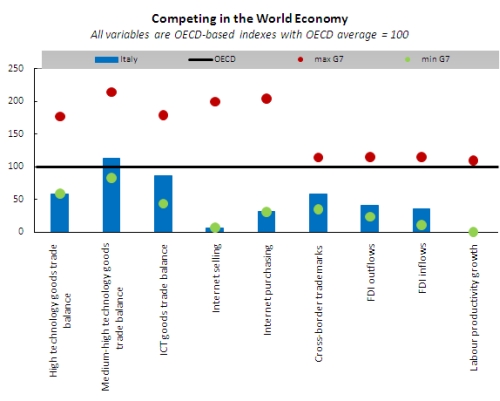 International co-patenting – two or more inventors from different countries - and cross-border patents – the “owner” and the inventor from different countries - suggest that the involvement of Italy in international research activities is low. International and cross-border patents account for 14% and 7% of Italian patents, respectively, while the OECD average is above 20% for both indicators. Similarly, the technological balance of payments registers small technological inflow and outflows. The international attractiveness of Italian universities appears low, as shown by the lowest rate of foreign doctoral students (5%) among G7 countries. 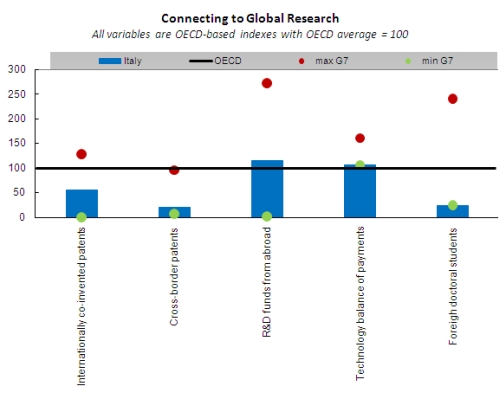 Italy’s educational performances appear in line with OECD countries. Graduation rates for men are slightly above the average while doctoral graduation rates slightly below. New doctoral degrees in science and engineering represent a higher share (45%). This evidence may be linked to the wage premium from tertiary education, which in Italy remains slightly higher than for the OECD average. 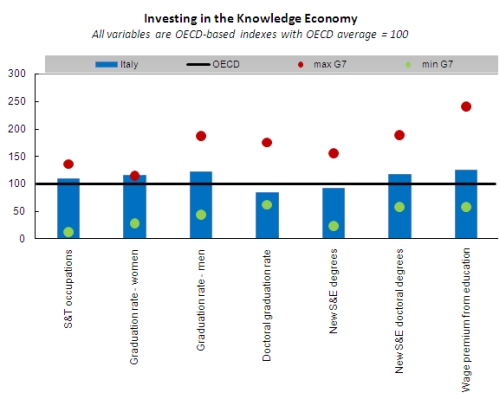