Total R&D expenditures in Germany amounted to 2.5% of GDP in 2007, a share above the G7 average (2.2%). German businesses finance 68% of total R&D, against an OECD average of 53%, and 12% of government R&D, the highest share among G7 countries. Government support to business R&D remains low: direct financing of business R&D (5%) is below the OECD average and R&D tax subsidy rates are the lowest among all OECD countries. 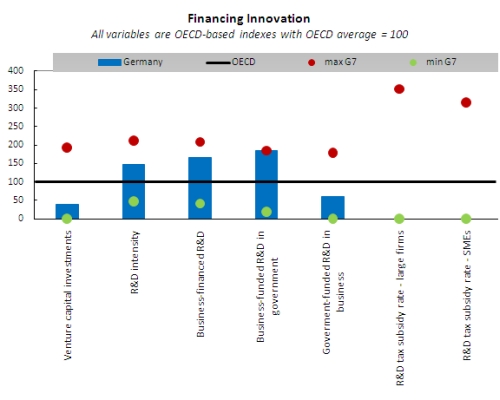 Germany is the third most inventive country in terms of patents, after the United States and Japan. Over 2005-07, its number of patents per million inhabitant (74) was more than twice the OECD average (33). Germany shows a significant specialization in environmental technologies. It is also the third largest inventor in nanotechnology: 10% of all nanotechnology patents over 2004-06 were invented in Germany. 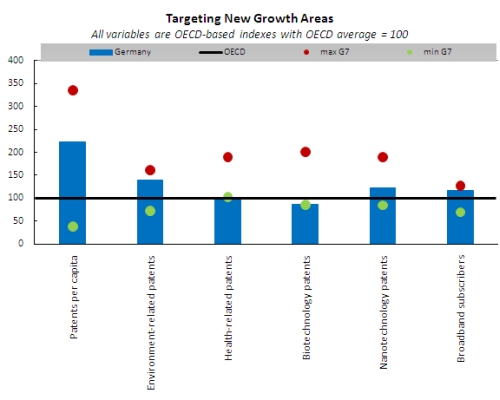 Germany has the second largest surplus in medium-high technology manufactures (7% of manufacturing trade in 2007), after Japan (15%).  It is also the largest exporter and importer of ICT goods in Europe and the fourth exporter of ICT services in the OECD area. The share of firms selling or buying on the Internet is higher than the OECD average.

Labour productivity growth over 1998-2008 was lower than in the OECD area. In the first quarter of 2009, FDI inflows dropped by 67% as a result of the economic crisis. 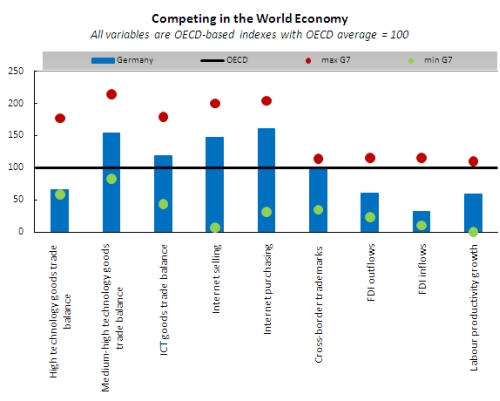 Several indicators suggest that the involvement of Germany in international research activities is low. R&D funds from abroad account for only 3% of business R&D, against an average of 10% for G7 countries in 2007. Co-patenting – two or more inventors from different countries - and cross-border patents – the “owner” and the inventor from different countries – are below the OECD average. 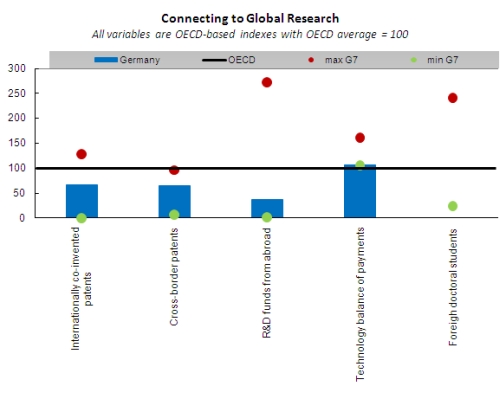 Germany awarded 13% of all doctorate degrees in the OECD in 2006, the second largest number after the United States (28%). It has the highest university graduation rate in science and engineering among G7 countries but the lowest rate of new doctoral degrees in the same disciplines.

Employment of university graduates grew by 1% a year over 1998-2008, the smallest growth among OECD countries.

Female employment rates of doctorate holders are also much lower than male rates. In science and technology occupation, women earn 42% less than men. 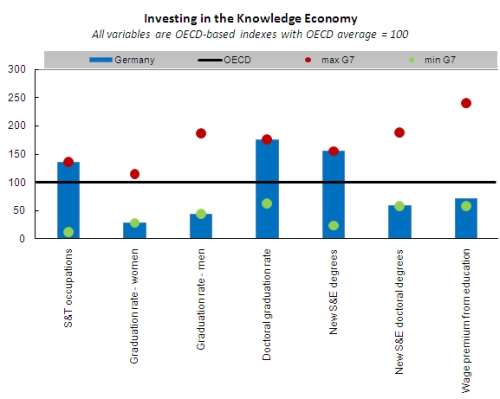