Government financing of business R&D (2.3%) is low compared to the OECD average (6.7%). The rate of R&D tax subsidies is higher, especially for SMEs which benefit from a rate 45% higher than large firms. 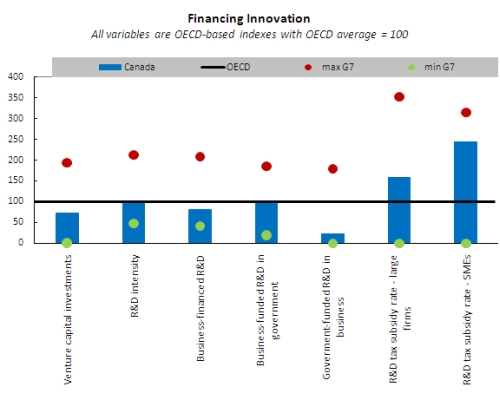 Canada has a low number of patents (21 per million inhabitants in 2005-07) compared to the OECD (33) and the G7 average (48). Patents reveal a strong research specialization in environment, health and biotechnology.

Above 10% of Canadian patent portfolio in 2005-07 were dedicated to biotechnology. Biotechnology R&D accounts for above 11% of all business sector R&D in Canada, the third largest share after Ireland (22%) and Belgium (13%).

The share of broadband subscribers (29% in 2008) is the highest among G7 countries. 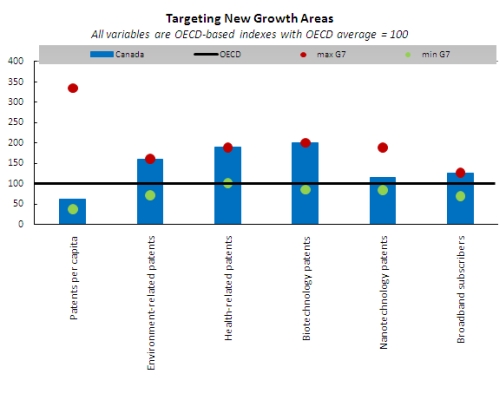 In 2007 Canada registered one of the largest trade deficits in high and medium-high technology goods among OECD countries. The same is true for the ICT manufacturing trade balance.
FDI inflows to Canada dropped by 97% in the first quarter of 2009, the largest decrease among G7 countries. 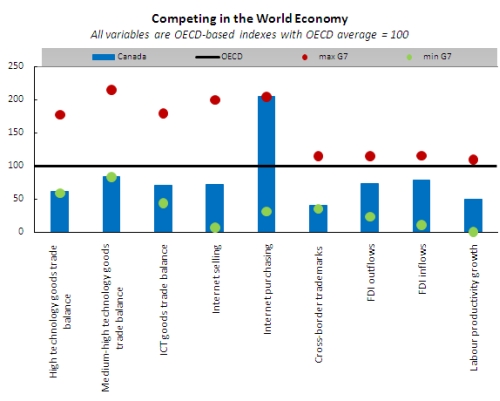 The degree of international cooperation in innovation in Canada seems in line with the OECD area. International co-patenting – two or more inventors from different countries - and cross-border patents – the “owner” and the inventor from different countries – are close to the OECD average. R&D funds from abroad accounted for over 15% of total business enterprise R&D funding in Canada in 2007.

Foreign students accounted for almost 40% of all doctoral students in Canada, one of the highest rates in the OECD. 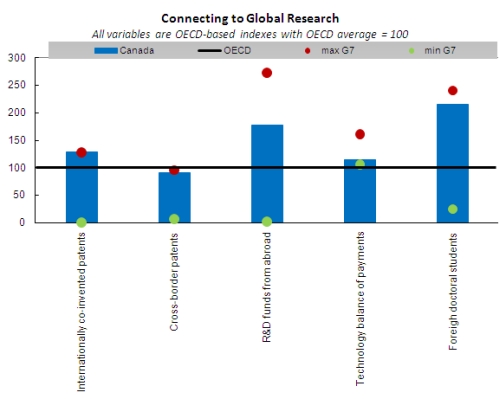 Graduation rates in science and engineering are lower the OECD average both at the university and the doctoral level.

Tertiary-level education increased by 2.7% a year over 1998 and 2007. Science and technology occupations accounted for about 36% of total employment in Canada in 2008.
In Canada, a worker with a bachelor degree and above earns 1.8 times more than a worker with primary education and below. This is lower than the average wage premium from tertiary education among G7 (2.1) and OECD countries (2.0). 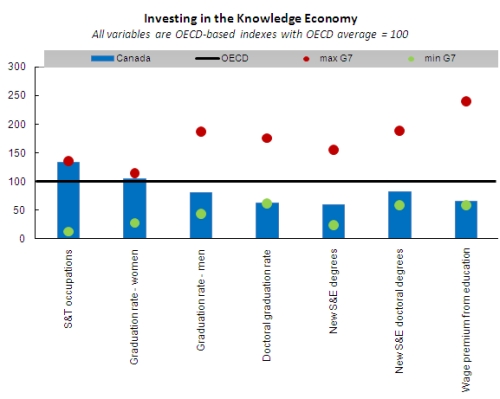