The confluence of several key socio-economic and technological trends is resulting in the generation of huge streams of data every day. The major trends include:

The collection and exploitation of these large data flows through data analytics is leading to a shift towards a data-driven socio-economic model commonly referred to as “big data”. In this model, data is a core asset that provides a huge resource for new industries, processes, services and goods leading to significant competitive advantage. In business, for example, data analytics are increasingly being used in a wide number of operations ranging from optimising the value chain and manufacturing production to more efficiently using labour and improving customer relationships. It is estimated that firms, which adopt data-driven decision-making, for example, have output and productivity that is 5-6% higher than what would be expected given their other investments and information technology usage. These firms also perform better in terms of asset utilisation, return on equity and market value.

To unlock the potential of big data and data analytics (big data analytics), OECD countries need to ensure the development of coherent policies and practices around the collection, transportation, storage and use of data, most prominently in areas related to privacy protection. New data sources, new actors and the increasing ease with which personal data can be collected, linked and processed, seriously challenge the effective implementation of current frameworks for privacy protection. But the potential implications for policy also spill over into many other domains; including among others open access to data, intellectual property rights, competition, skills and employment, infrastructure, and measurement.

First launched in 2005, Technology Foresight Forums are an annual event organised by the OECD Committee for Information, Computer, and Communications Policy (ICCP) to help identify opportunities and challenges for the Internet Economy posed by technical developments. The 2012 Technology Foresight Forum will focus on the potential of big data analytics as a new source of growth, which could help generate significant economic and social benefits. It will put big data analytics in the context of emerging trends discussed at the last three Foresight Forums, namely mobile communications (2011), smart ICTs (2010), and cloud computing (2009), to highlight the confluence of trends leading towards a data-driven economy (see figure below). 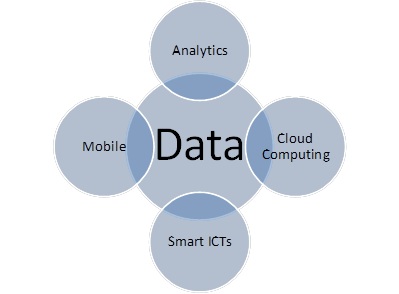 The 2012 Foresight Forum discussed the social and economic issues related to big data analytics that may put at risk fundamental values and warrant a review of current policy frameworks, most prominently those aimed at ensuring the protection of privacy, intellectual property, and competition. Other policy areas addressed included health care, science and research, government administration and labour markets.

This 2012 Forum will contribute to OECD’s ongoing horizontal project entitled New Sources of Growth: Intangible Assets (NSG) as well as to the follow-up horizontal project on Knowledge-Based Capital: Seizing the Benefits of New Sources of Growth, which will be launched in 2013. Both projects aim at i) providing structured evidence of the economic value of intangible assets, including data, as a new source of growth, and ii) improving understanding of current and emerging challenges for policies related to the increasing relevance of these intangible assets.