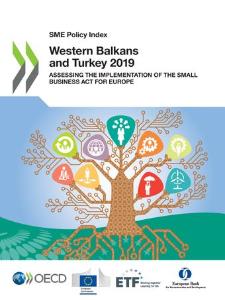 The fifth edition of the flagship publication SME Policy Index: Western Balkans and Turkey 2019 was launched at the WB-EDIF SME Forum on Tuesday, 7 May 2019 in Sarajevo, Bosnia and Herzegovina back-to-back with the EBRD Annual Meeting on 8-9 May 2019.

The WB-EDIF SME Forum was co-organised by the OECD, the EBRD and the European Commission (DG Near).

Following the high-level launch of the SME Policy Index: Western Balkans and Turkey 2019 in Sarajevo on 7 May 2019, the OECD South East Europe regional programme and its partner organisations are hosting a series of launches in each of the seven assessed economies. The specific results of the publication for each economy is discussed directly with local stakeholders including line ministries, government agencies, and representatives from academia, civil society and the private sector. 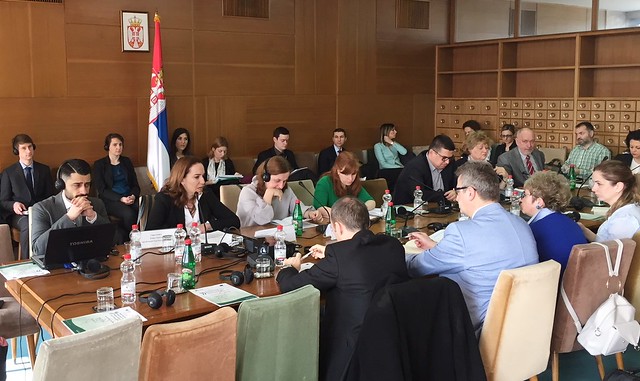 The Pristina meeting was opened by Mr. Endrit Shala, Minister of Trade and Industry for Kosovo, and by Mr. Riccardo Serri, Deputy Head of the European Office in Kosovo. The event was attended by over 120 participants representing a diverse group of public institutions, donors, private sector and civil society.

The Ankara meeting was opened by Dr. Cevahir Uzkurt, President of the Turkish Development and Support Administration for Small Enterprises (KOSGEB), and by Mr. Gabriel Munuera Vinals, Deputy Head of the EU Delegation to Turkey. The event gathered more around 200 people representing key ministries and the private sector.

The Istanbul meeting was opened by Ms. Neriman Pınar Işın, Director for EU Co-ordination at KOSGEB and Ms. Ela Yazıcı, Sector Manager at the EU Delegation to Turkey. The event was attended by over 50 participants representing a diverse group of public institutions, donors, private sector and civil society.

These in-country events in 2019 provided a forum for discussing economy-specific findings to enrich the policy debate in each economy, based on the tailored policy recommendations contained in the policy index. Each launch event is usually opened by a Minister and the Head of the EU Delegation.

As part of the assessment for the publication of the “SME Policy Index” for the Western Balkans and Turkey, the SBA team organised reconciliation meetings in each of the economies. The primary goal of these meetings was to reconcile the self-assessment carried out by the government with the independent assessment led by the OECD with the help of experts. By having a broad range of participants from relevant line ministries, EU delegations, private sector and civil society, the OECD and EBRD analysts were able gain a thorough understanding of each economy’s SME policy landscape.

Next to reconciling discrepancies in assessment answers, these events also created the unique opportunity to bring together different stakeholders, allowing them to exchange viewpoints, discuss challenges and possible solutions and policy measures for SMEs. By highlighting some of the strengths and weaknesses in each economy, the analysts sought to make the SBA principles a priority for policy-making in the Western Balkans and Turkey.

The Regional Policy Dialogue Meeting gathered more than 70 participants, comprising high-level policy makers, private sector and civil society representatives from the Western Balkans and Turkey, along with participants from the European Commission and a number of experts from the OECD and EU countries. The meeting served as a platform to discuss policies that would facilitate smooth and successful transition of SMEs towards greener economy. It has been instrumental in showcasing good practice examples from different OECD and EU countries aimed at improving SMEs environmental performance and helping SMEs to benefit from the opportunities offered by a green economy. By drawing on previous and ongoing OECD work, concrete recommendations were provided to the policy-makers from the Western Balkans and Turkey to help them overcome SME policy-related challenges. The meeting was opened by Ms. Gabriela Ramos, OECD Chief of Staff and Sherpa and Ms. Joanna Drake, Deputy Director-General for Mobility and Environment, DG Environment, European Commission.

A series of launch events were held across the region to present the key features of the SBA assessment methodology and process as well as to introduce the revised SME Policy Index assessment frameworks by dimension. The plenary sessions were followed by bilateral meetings to discuss the techincal aspects of the framework. Please refer to the individual meeting agendas for further information on each launch event.

The meeting was opened and chaired by the Deputy Minister of the Ministry of Finance and Economy of Albania, Ms Dajna Sorensen, and it was attended by more than 70 participants comprising senior policy makers from various line ministries and private sector representatives. The SBA Assessment methodology was presented to the participants, and bilateral meetings with line ministries were also organized in the afternoon to familiarise them with the overall process, as well as to clarify their role in the assessment.

Introducing the new cycle of the Small Business Act assessment for the Western Balkans and Turkey (2016-2019) – 16 December 2016, Paris, France 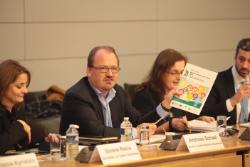 The event kicked off the new SBA Assessment cycle, by:

• Introducing the planned activities under the new 2016-19 SBA Assessment cycle
• Contributing to the SME policy-making dialogue in the Western Balkans and Turkey through a Regional Policy Dialogue Session on “Access to Finance – Alternative Financing Instruments”, focusing on current good practices of factoring and leasing as well as venture capital.

The event gathered over 50 participants: policy makers, directors of state institutions and regional organisations from the Western Balkans and Turkey that focus on SME policies, partner organisations (European Commission, European Bank for Reconstruction and Development, European Training Foundation) as well as representatives from the government of Romania.

Following the Paris launch event, the OECD, in cooperation with its partner organisations (European Commission, EBRD, European Training Foundation), held seven high-level launch events for the publication in the SEE region and Turkey. The events included a high-level public event, followed by in-depth discussions on the implementation of the publication’s recommendations.

The meeting gathered over 30 government representatives involved in the SME policy design and implementation together with other relevant SME stakeholders. The Head of the EU Delegation to Bosnia and Herzegovina, Mr. Lars-Gunnar Wigemark, welcomed the participants, while the National SBA Coordinator, Mr. Dragan Milović, chaired the discussions.

The launch event brought together around 40 participants from the Serbian government as well as representatives from business, academia, and the civil society. Ms. Katarina Obradović-Jovanović, National SBA Co-ordinator, opened and chaired the event.

The event gathered around 50 attendees focusing on SME policies. The event was opened by Ms. Hykmete Bajrami, Minister of Trade and Industry of Kosovo* and chaired by Mr. Besian Mustafa, National SBA Co-ordinator.

The meeting brought together around 30 participants from governmental and non-governmental institutions focusing on SMEs. The roundtable was opened by Mr. Vladimir Kavarić, Minister of Economy of Montenegro and moderated by Mr. Aleksandar Pavićević, National SBA Co-ordinator.

‌The event gathered over 40 representatives of the Albanian government, as well as the business sector, academia, civil society and the media. It was opened by Ms. Milva Ekonomi, Minister of Economic Development, Tourism, Trade and Entrepreneurship of Albania, and chaired by Ms. Evisi Kopliku, National SBA Coordinator.

*This designation is without prejudice to positions on status, and is in line with United Nations Security Council Resolution 1244/99 and the Advisory Opinion of the International Court of Justice on Kosovo’s declaration of independence.