The OECD flagship publication, Competitiveness in South East Europe: A Policy Outlook 2021, was launched virtually across the six Western Balkan economies throughout September and October 2021. In total, more than 450 participants from ministries, government agencies, embassies, academia, civil society and the private sector attended the meetings.

The OECD presented the economy-specific findings and recommendations for each of the 16 policy dimensions and zoomed in on one priority topic for each economy to discuss specific challenges and possible policy responses based on international best practices.

Senior representatives from the European Commission acknowledged that the Outlook provides a necessary and useful evidence base for the region’s reform agenda and high-level policy makers from the Western Balkan governments committed to translating the Outlook’s recommendations into their strategic action plans. 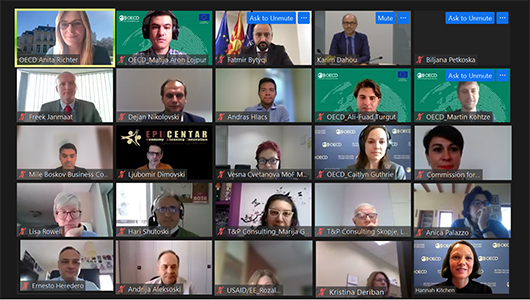 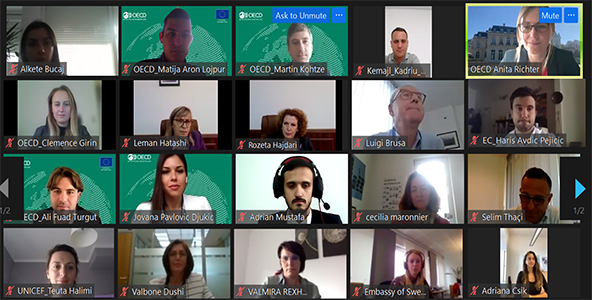 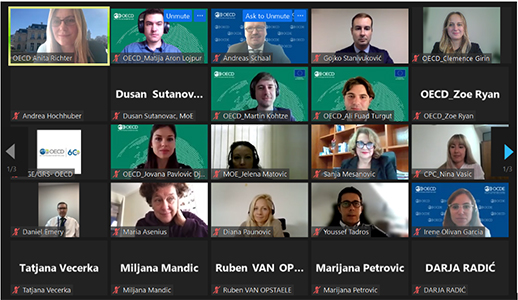 Following the High-level Conference in Paris in April 2018, the OECD publication, Competitiveness in South East Europe: A Policy Outlook 2018 will also be launched in the region throughout July, September and October 2018. The meetings are usually opened by a Minister and the Head of the EU Delegation and are followed by a detailed presentation by the OECD Secretariat, displaying the regional and economy-specific results of the publication. The launch meetings will conclude with Question & Answer sessions with key stakeholders, including line ministries, government agencies, and representatives from academia, civil society and the private sector. 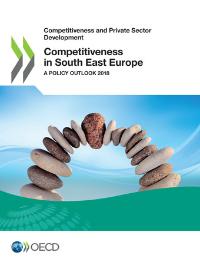 The OECD SEE High-Level Conference 2018 was held to support SEE economies in shaping a new reform agenda which strengthens economic competitiveness across four pillars: business environment, skills and capacity, economic structure and governance with a total of 17 policy areas. The conference served as a high-level forum for SEE economies to exchange experiences and good practices in using OECD tools and analysis in their policy reform processes. To enrich this discussion and reinforce this process, the Competitiveness in South East Europe: A Policy Outlook 2018 publication was launched.

The meeting served as a forum to discuss the OECD’s draft analysis and regional-level policy recommendations for each of the 17 policy areas of the Competitiveness Outlook assessment. In addition, it has enabled participants to learn about OECD tools and good practices for selected key policy recommendations. Participants included Competitiveness Outlook Coordinators, Ministry representatives and directors of statistical offices from each of the six partner economies, as well as representatives from several Directorate Generals of the European Commission, the Regional Cooperation Council, South East European Embassies in France, and various OECD Directorates. The meeting has paved the way for the drafting of the OECD flagship publication Competitiveness in South East Europe: A Policy Outlook 2018, which will be published in April 2018. 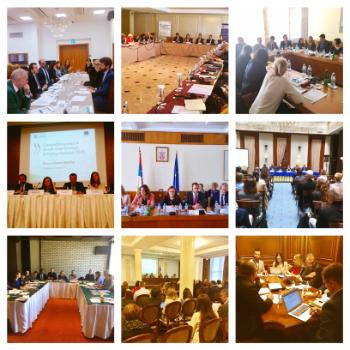 The reconciliation phase of the project was implemented between 28 March and 15 May 2017 with the aim of meeting government and non-governmental stakeholders across South East Europe to fill remaining information gaps within the Competitiveness Outlook assessment and to align on differences between the government self-assessment the independent assessment. The OECD team met with more than 1,000 stakeholders across the six partner economies of South East Europe and held approximately 150 in-depth meetings across the 17 policy dimensions. As a next step, the government and the independent assessments will be reconciled into a single assessment which is the basis for analysing and drafting the Competitiveness Outlook publication.

The event brought together around 25 representatives from six South East European governments and partner organisations (European Commission, Eurostat, Regional Coordination Council) to prepare governments for the reconciliation and analysis phase of the project. In particular the reconciliation meetings were discussed and planned. These will take place throughout March, April and May in the region’s capitals.

The event brought together around 30 representatives from six South East European governments and partner organisations (European Commission, Eurostat, Regional Coordination Council)  to kick-start the second Competitiveness Outlook cycle which will lead to the 2018 flagship publication. Meeting participants discussed the project design and prepared the assessment phase launched in October and November across the region's capital cities.

In addition to the high-level conference in Paris in February 2016, the Competitiveness Outlook 2016 publication was also launched in the capitals of each of the six beneficiary economies during March and April 2016. The meetings were usually opened at deputy Prime Minister or ministerial level of the host economy and were followed by a detailed presentation by the OECD Secretariat, displaying the regional and economy-specific results of the publication. The launch meetings were concluded by question and answer sessions with key stakeholders, including line ministries, government agencies, and representatives from academia, civil society and the private sector.

‌This event built on the work of the OECD South East Europe Regional Programme and created an opportunity to further strengthen the relations between the countries of the region and the OECD and support a broader, high-level debate on factors of competitiveness for growth in the region.

The event was structured around:

*This designation is without prejudice to positions on status, and is in line with United Nations Security Council Resolution 1244/99 and the Advisory Opinion of the International Court of Justice on Kosovo’s declaration of independence.