9 Sep 2021 - The OECD area unemployment rate fell to 6.2% in July 2021, from 6.4% in June, 0.9 percentage point above the pre-pandemic rate observed in February 2020.[1] Some care is needed in interpreting the fall in the OECD area unemployment rate compared to the April 2020 peak, as it largely reflects the return of temporary laid-off workers in the United States and Canada, where they are recorded as unemployed.[2] The number of unemployed workers across the OECD area fell by 1.6 million in July 2021, reaching 41.1 million.

In the euro area, the unemployment rate declined to 7.6% in July 2021, from 7.8% in June, the third consecutive monthly fall. Declines were observed in almost every euro area country, the largest being in Spain, where it fell by 0.7 percentage point, to 14.3 %. 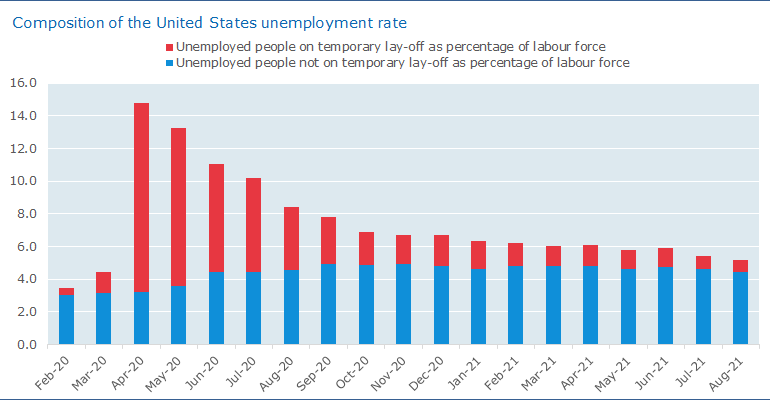 Source: OECD calculations based on US Current Population Survey

[1] New methodology in the EU Labour Force Survey from 2021 with the entry into force of the Integrated European Social Statistics (IESS) Framework Regulation, resulting in updated definitions of the labour status. These changes result in time series breaks between December 2020 and January 2021 for several European countries. More details on the main methodological changes to the EU LFS can be found here.

[2] For Canada and the United States, the statistical treatment of people on temporary layoff is different from other countries, where these people are typically recorded as employed. See the note on the divergence in employment and unemployment statistics during the Covid-19 crisis in the end of this news release.