15/04/2019 - Concerns are growing that globalisation may have created a few big winners at the expense of many losers. This has stimulated efforts to analyse how trade can be made to Work for All, for example by focusing on the skills and occupations of affected workers. However, there has been less attention to the gender dimension of globalisation and global value chains, and in particular to whether they are having differing effects on men’s and women’s work.

New analysis shows that men’s employment is more dependent on international trade than women’s. On average across the countries studied, 37% of men’s jobs, but only 27% of women’s jobs, depend on exports – either because the firms they work for export directly, or because they indirectly supply other firms that subsequently export. This compares to only 27% of women’s employment (Figure 1).

Women’s jobs are thus both less dependent on trade overall, and less directly involved with manufacturing exports. These trends arise partly from differences in female labour participation across industries and partly from the relative contributions of these industries to total trade. Overall, women tend to work in business services and in other, mainly non-market, services, rather than in manufacturing, where on average they only account for a quarter of the workforce.

The nature of the upstream participation also differs significantly between men and women. While the bulk of upstream jobs are in the services sector, this is particularly true for women’s jobs. Taking again Germany as an example, Figure 4 shows that less than 20% of women’s upstream jobs are in industrial and goods sectors (Agriculture, Utilities, Construction, Manufacturing and Mining), compared to 45% for men. 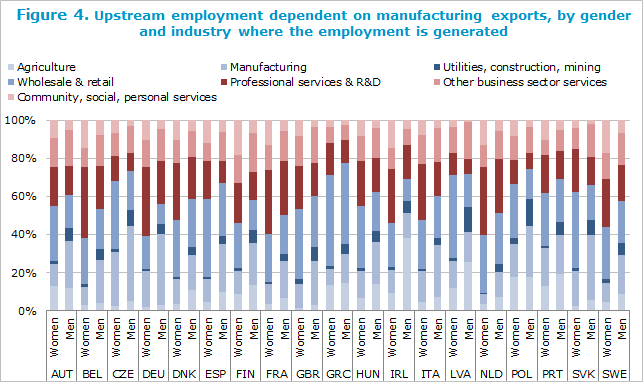 The detailed data compiled for this analysis on the export-dependency of men’s and women’s jobs provide an indication of the extent to which reducing gender wage gaps will depend on encouraging more women to seek employment in higher-paying sectors of the value chain.

How the indicators were constructed

There are many reasons why trade in services data are unsatisfactory, especially compared to merchandise trade statistics. Among the most straightforward is the fact that they can be difficult to identify despite the plethora of international guidelines. Whereas the physical nature of goods means they are relatively easy to measure when they cross borders, the delivery of services is more difficult to observe – even more so when they are delivered in digital form. Data confidentiality restrictions, when only one or a few firms dominate trade in a certain services category, add another layer of complexity. But there are many more factors that cause measurement problems and asymmetries. For example, countries typically use model-based estimates for services that can only be observed indirectly, and these may differ across countries. Payments for services may not coincide with their delivery (for example in construction projects). And measurement can become even more complicated when the service is delivered between affiliated firms.