Portugal can use its economic recovery to build up resilience

18/02/2019 - Portugal’s economic recovery is now well established, with GDP back to pre-crisis levels, a substantially lower unemployment rate and renewed investment and domestic consumption now joining a robust export sector to drive the economy. Efforts should now focus on reducing vulnerabilities to build resilience to future shocks, according to a new OECD report.

The latest OECD Economic Survey of Portugal forecasts GDP growth for 2019 and 2020 of 2.1% and 1.9% respectively. A drop in the unemployment rate to below 7% and rising earnings are driving consumption, adding to the economic lift from tourism and manufacturing, which were behind much of the 60% rise in export volumes that the Portuguese economy experienced from 2009 to 2017. 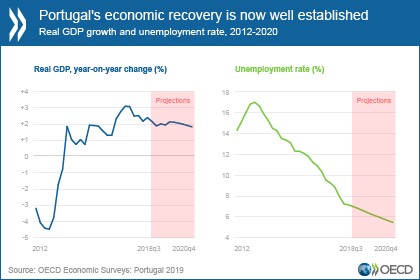 The Survey, presented in Lisbon by OECD Secretary-General Angel Gurría alongside Portuguese Minister Assistant to the Prime Minister and for the Economy Pedro Siza Vieira and Deputy Minister and Secretary of State of Finance Ricardo Mourinho Félix, says Portugal should now take the opportunity to further shore up its public finances and banking sector.

To improve living standards and address still-high levels of poverty and inequality, Portugal should also aim to raise productivity, which has stalled in recent years, and get the long-term unemployed back into jobs.

At around 120% of GDP, Portugal’s public debt is falling but still among the highest in the OECD, limiting the country’s ability to respond to external shocks. Reducing the debt will require ongoing fiscal consolidation and further measures to offset the rising costs of ageing, including optimising health spending and further reducing pathways to early retirement. On the revenue side, the tax base could be broadened by reducing consumption tax exemptions and expanding the use of environmental taxes.

In the banking sector, there is a need to reduce the share of non-performing loans, which have declined since a peak in 2016 but remain high by OECD standards.

“Portugal has made tremendous progress restoring its economy to health since the financial crisis, but challenges remain in public finances and the financial sector,” said OECD Secretary-General Angel Gurría. “The more Portugal can do to build up resilience while its economy is turning over nicely, the better it will be able to weather any future shock, ensuring the sustainability and inclusiveness of its economic recovery.” Read the full speech.

External risks to Portugal’s outlook could include a slowdown in economic activity in major trading partners and future rises in Eurozone interest rates.

The Survey includes a thematic chapter on efficiency in the judicial system and its effect on productivity and economic performance. It notes that despite reforms to reduce the time needed to resolve a civil or commercial case in the court system, cases still typically run longer than in other OECD countries. The report also highlights the importance of continuing efforts to foster integrity and promote transparency in both the public and business sectors, as a key priority.

A second thematic chapter focuses on Portugal’s export performance. With exports still relatively low as a share of GDP, it recommends doing more to improve competitiveness on international markets, to open up to external trade and to participate in global value chains. This could include removing barriers to competition, to further encourage exporting firms to compete on price and quality, and making efforts to improve domestic infrastructure and skills.

An Overview of the Economic Survey, with the main conclusions, is accessible at: www.oecd.org/economy/surveys/portugal-economic-snapshot/.