21/09/2012 - Pension fund assets in OECD countries hit a record USD 20.1 trillion in 2011 but return on investment fell below zero, with an average negative return of -1.7%s, according to the OECD’s latest Pension Markets in Focus. The report says that weak equity markets and low interest rates drove the poor performance.

Funds in Spain, the United States, Italy and Japan had negative returns ranging from -2.2% to -3.6%. Seven countries, including Finland, Greece, Austria and Poland, saw returns worse than -4% in real terms. 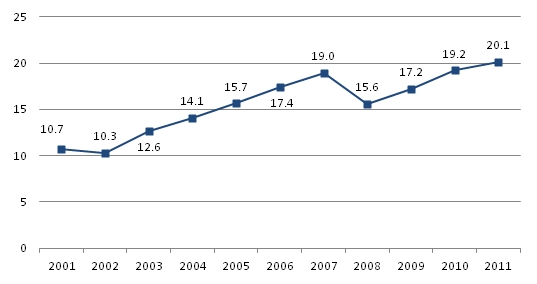 Many funds shifted their geographical allocation to reduce exposure to countries deemed to be risky, notably in Chile, Denmark, Netherlands and the Slovak Republic. The crisis also led many funds to reconsider their alternative investments, such as hedge funds and private equity, and strengthen their governance and risk controls.

Looking ahead, funds need to find solutions to shortfalls in fudning through more transparent investment disclosure, better understanding and confidence on the part of pension fiduciaries, and more consistent performance measurement, says the OECD.

The report is available here.