“This reform will make our international tax system fairer and work better in a digitalised and globalised world economy,” he said.

At their summit in Rome this weekend, G20 leaders called on the OECD/G20 Inclusive Framework on BEPS to develop the model rules and multilateral instruments swiftly, to ensure they come into effect globally in 2023.

“As we move into the implementation phase of the agreement, the OECD stands ready to facilitate the work needed to ensure the timely and effective implementation of the two-pillar solution", said Mr Cormann. “Agreement without implementation is de facto no agreement at all, so countries must move as quickly as possible to bring both pillars into effect.”

The deal struck on 8 October 2021 among 136 countries and jurisdictions representing 94% of global GDP will, once implemented, reallocate more than USD 125 billion of profits from around 100 of the world’s largest and most profitable multinational enterprises to countries worldwide, ensuring that these firms pay a fair share of tax wherever they operate and generate profits. The agreement also establishes for the first time a global minimum corporate tax rate of 15% that will see countries collect around USD 150 billion in new revenues annually.

The OECD says the deal has already de-escalated tax and trade tensions. Full implementation of the two-pillar agreement will be key to restoring, and bolstering, tax certainty. 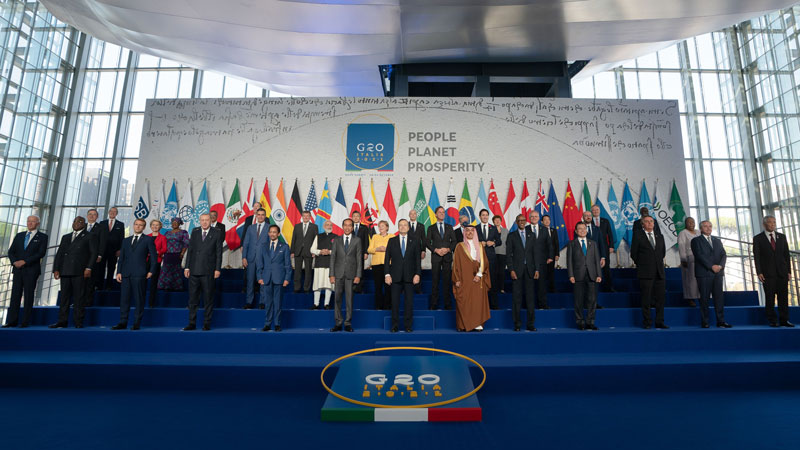 Looking ahead to the COP26 UN Climate Change Conference opening today in Glasgow, Mr Cormann said: “The tax agreement represents a major victory for multilateralism, which we should all seek to replicate in responding to another key global challenge - climate change.”

Mr Cormann said building on the successful experience of the Inclusive Framework on international taxation, the OECD was well positioned to help facilitate a multilateral process to achieve an appropriately ambitious, multilaterally agreed, internationally more coherent and globally better-coordinated approach to the pricing of emissions. “We need much better data tracking of the cost and outcomes achieved through various measures to help better inform judgements about a globally more coherent approach to climate action and to facilitate a more concrete dialogue on how best to get to global net zero by 2050,” he said.

The OECD, as a long-standing, strategic partner of the G20, played a key role in informing the priorities of Italy’s Presidency in 2021, including in its response to the COVID-19 crisis and the transition towards a more sustainable, inclusive, balanced and resilient global recovery.

The OECD multidisciplinary analysis has continued to support G20 policy reform efforts and the achievement of its flagship commitments, such as by continuing to monitor progress towards the G20 Brisbane goal of reducing the gender gap in labour market participation by 25% by 2025; and by designing, this year, the G20 Gender Roadmap aimed at creating better and equally paid jobs for women as well as improving their opportunities in the labour market.

Leveraging its standards and instruments, the OECD has also informed Leaders’ outcomes to promote a level playing field through the criminalisation of foreign bribery and adherence to the OECD Anti-bribery Convention; as well as to improve the governance of technology and to promote shared values through the implementation of OECD AI (artificial intelligence) Principles, through its Recommendation for the Protection of Children Online and through its work on the interoperability of G20 data regulatory frameworks to promote free flow of data with trust.