22/02/2022 - Norway’s high vaccination rate has helped to limit the impact of COVID-19 on its population and economy, yet the country must tackle challenges including high house prices and falling labour force participation to sustain its strong socio-economic outcomes, according to a new OECD report.

The latest OECD Economic Survey of Norway says that improving public spending efficiency, raising employment and productivity levels, and ensuring affordable housing will be all key for a strong and sustainable economic recovery. It is also important to keep a close watch on inflationary pressures from spikes in electricity prices and bottlenecks in semiconductors, lumber and shipping.

“Norway’s handling of the COVID-19 crisis has been sound. GDP per capita remains among the highest of OECD countries, yet there are still challenges to overcome,” OECD Secretary-General Mathias Cormann said. “Slower wealth fund growth combined with population ageing will put pressure on government budgets and very high house prices pose a risk to financial stability. It will be important to contain wage and price pressures while taking action to increase both employment and productivity.” 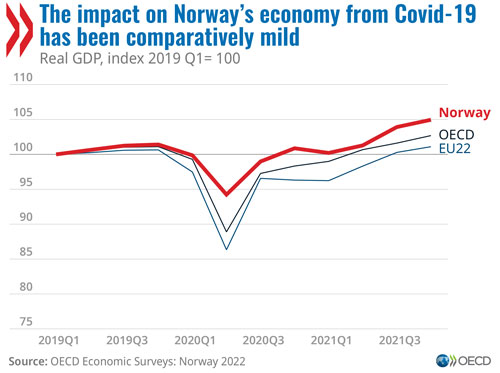 The Survey sees economic output running slightly above trend over the next two years with GDP growth projected at 3.7% in 2022 and 2.2% in 2023, helped by households spending savings accumulated during the initial phases of the pandemic. Most economic sectors hit hard by the pandemic are now recovering.

On the other hand, the COVID-19 crisis has exacerbated pressures on the housing market in Norway, as in many other OECD countries. Strong demand driven by low borrowing costs and increased teleworking have led to steep rises in house prices, which are up by more than 80% since 2010. High prices and mortgage debt pose a risk to financial stability and make it hard for young buyers to purchase their first home. Renting is also relatively expensive compared to the average in the OECD. The Survey recommends removing obstacles to housing supply, for example through easing land use regulations and providing better support to low-income renters. Improving taxation of housing could also help. Reforms are needed to ensure housing assets are treated more like other investments. Removing generous tax concessions to property owners would help alleviate pressure on housing prices in supply-constrained cities and provide revenue to support less-affluent households.

The housing market pressures come as scope for public spending on new policy measures is set to shrink in the coming years due to slower growth in the sovereign wealth fund that invests profits from Norway’s oil and gas sector, combined with rising healthcare and pension costs from an ageing population. Public spending policy needs to focus on strengthening value for money including through increased efficiency in public services and more use of cost-benefit analysis in investment decisions.

Strengthening productivity is also key. Business sector productivity growth has picked up in recent years but it is still less than half the rates of two decades ago. Conditions could be improved for business start-up and insolvency procedures, as well as innovation and technology adoption.

Norway’s labour-force participation has also slipped from the third-highest in the OECD in 2000 to the 13th highest today, due in part to generous sick-leave, pension and disability compensation systems having the unintended consequence of eroding labour supply. More could be done to ensure disability and sick-leave schemes facilitate a return to work and to link retirement schemes to life expectancy to increase employment rates among older workers.

The Survey also calls for Norway to continue its transition to a greener economy. Norway’s take-up of electric vehicles is among the highest in the world, and extensive hydropower means the country’s economic activity generates relatively low CO2 emissions. However, this means a large share of emissions is now generated in sectors where further reductions will be hard to achieve. Norway has raised its ambition on emission reduction and is combining market-based instruments with regulation and support for green technology. It is important that proposed carbon price increases proceed as planned over the next few years. It is also important to push ahead with proposals to remove regulatory impediments to increased use of second-hand building materials. Pressing on with the flagship carbon-capture and storage programme (Longship) would also support Norway’s climate transition.

See a Survey Overview with key findings and charts (this link can be used in media articles).