How Was Life? shows long-term progress in key areas of well-being

02/10/2014 - People’s well-being has generally progressed since the early 20th century across a large part of the world, according to new research published by a consortium of economic historians (CLIO-INFRA) and produced in collaboration with the OECD and OECD Development Centre.

How Was Life? Global Well-Being since 1820 shows that, with the exception of sub-Saharan Africa, countries have generally become more equal to each other in terms of well-being than in terms of per capita GDP – particularly in recent decades.

The study presents for the first time systematic evidence of trends in areas such as health, education, inequality, the environment and personal security over the past 200 years.

By bringing together long-term, historical data, the study makes an important contribution to key questions on the extent to which well-being has been linked to economic circumstances.

The study reveals that wages of manual workers, when adjusted for inflation, have increased about eight-fold globally since 1820 while GDP per capita rose 10 times over the same period. It shows that rises were faster in Western Europe, North America, Australia, the Middle East and North Africa than in other regions.

Income inequality fell between the end of the 19th century until around 1970 when it began to rise markedly. In Eastern Europe, inequality climbed sharply in the 1990s after the collapse of Communism. China, too, has experienced recent rises. After 1980, globalisation contributed to higher income inequality within countries while leading to a decline in the income gap between nations, the study says.

In some areas, such as education and health, the statistical correlation with GDP per capita has gradually shifted over time. This implies that some well-being outcomes have been increasing in some countries and regions even when their per capita GDP stagnated.

Life expectancy worldwide rose from less than 30 years in 1880 to almost 70 in 2000. Because of advances in health care, life expectancy improved even when GDP per capita stagnated.

The study finds little correlation with how rich a country is and personal security, as measured by homicide rates and exposure to conflict. Murder rates in the United States have been relatively high throughout the past 200 years while they are low in large parts of Asia.

The study shows strong progress in reducing gender inequality over the past 60 years in many countries. But differences between regions remain large. The Western countries of Europe and North American, for instance, performed best, although gender equality is still inexistent there. The Middle East and North Africa; and South and Southeast Asia performed worst.

How Was life? Global Well-Being since 1820, a collaboration between the OECD, the OECD Development Centre and the CLIO-INFRA project of academic researchers, has compiled data for 25 countries, eight global regions and for the world.

To obtain a copy of the study, journalists are invited to contact the OECD Media Division (news.contact@oecd.org ; tel: + 33 1 45 24 97 00). Further information is available online about the OECD’s work on measuring well-being.

Compare well-being indicators over time in the interactive graph 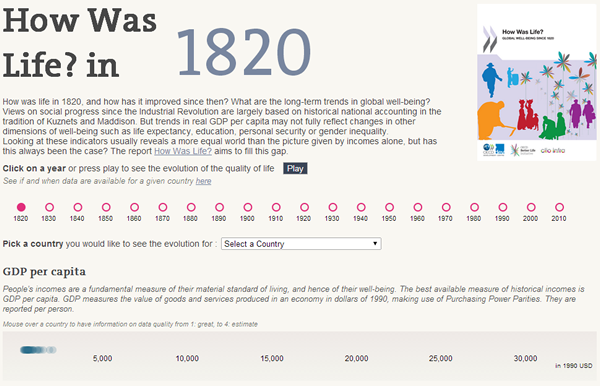