10/09/2019 - Demand for tertiary education continues to rise, but its further expansion will only be sustainable if it matches the supply of graduates with labour market and social needs and gives them the skills required to navigate the future, according to a new OECD report. 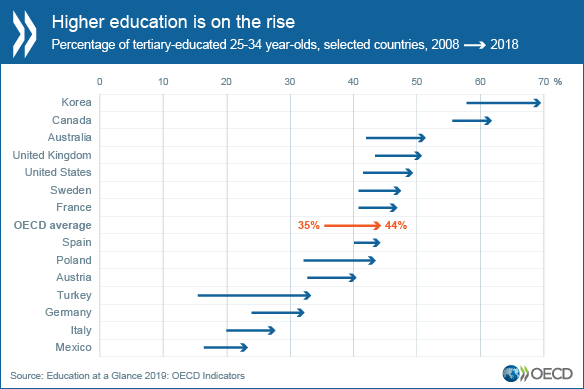 Education at a Glance 2019, which is part of the Organisation’s “I am the Future of Work” campaign, finds that 44% of 25-34 year-olds held a tertiary degree in 2018, compared to 35% in 2008, on average across OECD countries. The employment rate of tertiary-educated adults is 9 percentage points higher than for those with upper secondary education and they earn 57% more.

However, some sectors in high demand may struggle to find the skills they need. Less than 15% of new entrants to bachelor’s programmes study engineering, manufacturing and construction and less than 5% study information and communication technologies, despite these sectors having among the highest employment rates and earnings. Women are particularly under-represented, making up fewer than one in four entrants, on average, across OECD countries.

“It is more important than ever that young people learn the knowledge and skills needed to navigate our unpredictable and changing world,” said OECD Secretary-General Angel Gurría, launching the report in Paris. “We must expand opportunities and build stronger bridges with future skills needs so that every student can find their place in society and achieve their full potential.”

Many institutions are evolving to meet changing job market demands by promoting flexible pathways into tertiary education, balancing academic and vocational skills, and working more closely with employers, industry and training organisations. But they must also balance larger enrolments with the need to contain costs, while maintaining the relevance and quality of their courses, says the report.

Between 2005 and 2016, spending on tertiary institutions increased at more than double the rate of student enrolments to about USD 15 600 per student on average across OECD countries. Private sources have been called on to contribute more as countries introduce or raise tuition fees.

The report finds that, on average across OECD countries, about one in six 15-24 year-olds are enrolled in vocational programmes. The attainment gap among young tertiary-educated adults and those with upper secondary has narrowed. In 2018, the share of young adults with an upper secondary or post-secondary non-tertiary qualification, 41%, is almost equal to the share attaining tertiary education, 44%.

Further information on Education at a Glance, including country notes, multilingual summaries and key data, is available at: http://www.oecd.org/education/education-at-a-glance/.

The report is available to journalists on the OECD’s password-protected site.