30/06/2011 - Health spending continues to rise faster than economic growth in most OECD countries, maintaining a trend observed since the 1970s. Health spending reached 9.5% of GDP on average in 2009, the most recent year for which figures are available, up from 8.8% in 2008, according to OECD Health Data 2011.

While governments must do more to get better value for money from healthcare spending, they must also continue pursuing their long-term goals of having more equitable, responsive and efficient health systems, according to the OECD.

Variations in health expenditure across countries

In 2009, there were large variations in how much OECD countries spent on health and the health spending share of GDP. The United States continued to outspend all other OECD countries by a wide margin, with spending on health per capita of $7960. This was two-and-a-half times more than the OECD average of $3223.

As a share of GDP, the United States spent 17.4% on health in 2009, 5 percentage points more than in the next two countries, the Netherlands and France (which allocated 12.0% and 11.8% of their GDP on health). Norway and Switzerland were the next biggest spenders on health per capita, with spending of more than $5000 per capita in 2009. 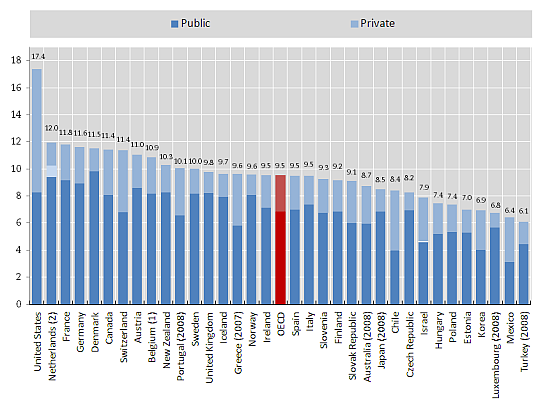 These are some of the short- and long-term trends shown in OECD Health Data 2011, the most comprehensive source of comparable statistics on health and health systems across the 34 OECD countries. Covering the period 1960 to 2009, this interactive database can be used for comparative analyses on health status, risk factors to health, health care resources and utilisation, and health expenditure and financing.

OECD Health Data 2011 is available for the first time in OECD.Stat, the statistics portal for all OECD databases.

More information about the database is available at www.oecd.org/health/healthdata.