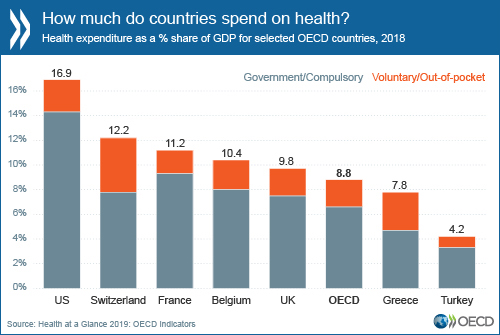 ‌Health at a Glance 2019: OECD Indicators says that the United States spent the most on health care in 2018, equivalent to 16.9% of GDP, above Switzerland, the next highest spending country, at 12.2%. Germany, France, Sweden and Japan all spent close to 11% of GDP, while a few countries spent less than 6% of their GDP on health care, including Mexico, Latvia, Luxembourg, and Turkey at 4.2%.

Health at a Glance outlines areas where spending could be more effective:

Health at a Glance 2019 highlights some worrying patterns in health outcomes and unhealthy lifestyles.

The causes include rising levels of obesity and diabetes that have made it difficult to maintain previous progress in cutting deaths from heart disease and stroke. Respiratory diseases such as influenza and pneumonia have also claimed more lives in recent years, notably amongst older people.

Smoking, drinking and obesity continue to cause people to die prematurely and worsen quality of life:

The report argues that more attention should be placed on patient-reported outcomes and experiences. Preliminary results from OECD’s new initiative on Patient Reported Indicator Surveys show that hip replacements improve an individual’s quality of life – mobility, activity, pain – by around 20%.

“Health systems can and must do better to improve the health of our populations. Measuring how health systems change people’s lives for the better is essential if we are to put resources where they can have most effect,” said Stefano Scarpetta, OECD Director for Employment, Labour and Social Affairs.

Health at a Glance 2019: OECD Indicators, together with country notes for Australia, France, Germany, Italy, Japan, Mexico, the United Kingdom and the United States, is available at http://www.oecd.org/health/health-at-a-glance-19991312.htm.