25/08/2016 - Growth of real gross domestic product (GDP) in the OECD area slowed slightly to 0.3% in the second quarter of 2016, down from 0.4% in the previous quarter, according to provisional estimates.

Growth slowed in most Major Seven economies in the second quarter of 2016, with the exception of the United Kingdom (pre-Brexit) and the United States, where growth picked-up to 0.6% and 0.3%, respectively, compared with 0.4% and 0.2% in the previous quarter.

Year-on-year GDP growth for the OECD area fell to 1.6%, decreasing for the fourth straight quarter, to the lowest rate since the third quarter of 2013. Among Major Seven economies, the United Kingdom (2.2%) recorded the highest annual growth rate, while Japan registered the lowest (0.6%). The United States recorded its lowest annual growth rate (1.2%) in three years. 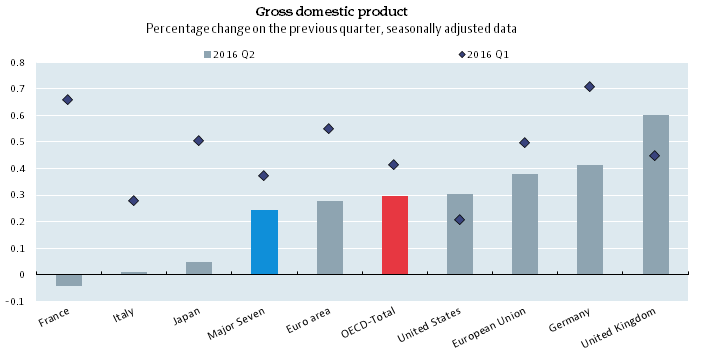 Note: Growth rate presented in this chart are based on data with more than one decimal.