15/04/2019 - The Japanese economy is undergoing the longest expansion in its post-war history, marked by strong job creation and business investment. Government policy must overcome the intertwined challenges posed by rapid population ageing and high government debt to ensure sustainable and inclusive growth for future generations, according to a new report from the OECD.

The latest OECD Economic Survey of Japan looks at the factors behind the faster growth achieved in recent years, as well as the deep changes expected from the projected decline in the labour force. The Survey projects growth of about 0.75% this year and next, in the context of current trade tensions and slower economic growth in China that risk disrupting private sector investments and global value chains. 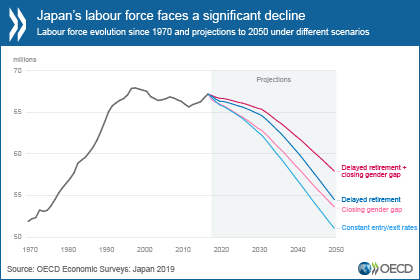 The Survey, presented in Tokyo by OECD Secretary-General Angel Gurría, discusses the need for fundamental labour market reform to make the most of Japan’s human resources in the context of a shrinking labour force. It also looks at how Japan can ensure fiscal sustainability in an ageing society, which is putting upward pressure on spending.

“The Japanese economy has been supported by the three arrows of Abenomics – bold monetary policy, flexible fiscal policy and structural reforms,” Mr Gurría said. “Reforms that adapt public finances and the labour market to a much older society are urgently needed to ensure fiscal sustainability and continuing prosperity in the future.”

With Japan’s population projected to remain the oldest in the OECD, the Survey underlines the need for wide-ranging labour market reforms for a shrinking workforce. A shift to more flexible employment and wage systems based on performance rather than seniority would enable Japan to better utilise its human capital, including women and older persons, the Survey said. This should include abolition of firms’ right to set the mandatory retirement at age 60, reducing the link between seniority and wages, and renewed focus on measures to remove obstacles to employment, to increase women’s access to childcare, and to allow them to play a greater role in the workforce.

With the rising number of elderly putting increasing pressure on public spending, further efforts will be needed to stabilise Japan’s public debt, which at 226% is already the highest in the OECD. A comprehensive fiscal consolidation plan – covering specific spending cuts and tax increases, including a further gradual rise in the consumption tax – will improve fiscal sustainability.

Healthcare reforms, notably taking long-term care out of hospitals, improving preventive medicine and increasing the use of generic drugs, are urgently needed to limit spending. Tax and pension reforms will also be required.

Boosting labour productivity will be another key to offsetting the impact of a smaller workforce. Policy should specifically seek to reduce the productivity gap between large firms and small and medium-sized enterprises.

An Overview of the Economic Survey of Japan, with the main conclusions, is accessible at: http://www.oecd.org/eco/surveys/japan-economic-snapshot.