Estonia should reduce its oil shale reliance for greener growth

01/03/2017 - Estonia needs to move faster to reduce its dependence on oil shale so it can advance towards a greener economy and reduce air pollution and waste generation, according to a new OECD report.

The OECD’s first Environmental Performance Review of Estonia recommends working to improve energy efficiency, buying more clean energy from the European grid, and stepping up investment in renewable energy sources. Estonia’s attachment to oil shale mining for energy generation means it has the most carbon intensive economy in the OECD and the third most energy intensive.

“Reducing its dependence on oil shale is Estonia’s number one economic, environmental and social challenge, and it cannot afford to wait until the shale runs dry to make a start,” said OECD Environment Director Simon Upton, presenting the Review in Tallinn. “For the sake of its economy and for the health and well-being of its people, Estonia needs to find a way today to get onto a green growth path.” 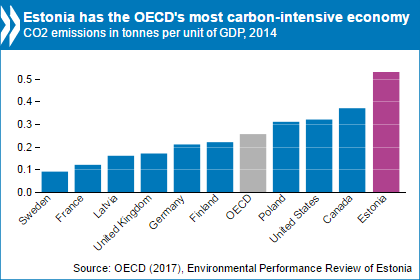 Estonia’s greenhouse gas emissions rose by 23% from 2000 to 2014, well below its economic growth of 64% over the period but still the third-highest increase in the OECD area after Turkey and Korea.

Estonia reached its 2020 EU target of 25% of renewable energy in gross final energy consumption early in 2011, helped by government subsidies for biomass and wind power generation and the extensive use of biomass for heating. Yet the rate of renewable electricity generation remains among the lowest in the OECD, and the economic viability of new wind projects is uncertain at today’s carbon and electricity prices.

An ambitious green tax reform agenda which aims to shift part of the tax burden from income to consumption, natural resource use and pollution is on-going. Revenues from environment-related taxes rose to a peak of 2.9% of GDP in 2010 then declined to 2.6% in 2014, leaving Estonia in the upper third of OECD member countries on this indicator. There is still ample room, however, to raise taxes on emissions and other environmental impacts.

Estonia generates 35 times the EU average in hazardous waste per capita, 98% of which comes from oil shale combustion and refining. Leachate from landfills where it is deposited, particularly Soviet era ones, contaminates groundwater. Generation of non-hazardous mining waste has risen by 40% since 2005 as the declining quality of shale requires higher volumes to be extracted.

Estonia joined the OECD in 2010 and as a member of the European Union since 2004 is now integrated into the European electricity grid. The Review’s recommendations include: