Boosting Resilience through Innovative Risk Governance estimates that earthquakes, social unrest, industrial accidents, terror attacks, pandemics and other disruptive events cost advanced and emerging nations around USD 1.5 trillion in damages and economic losses over the last decade, more than double what they cost over the previous 10 years.

Without action, these costs could rise further as climate change, higher concentrations of people and assets in risk-prone areas and closer economic links between countries mean the impact of such events spreads more quickly across borders and business sectors.

“Major disruptive events are happening more frequently and our ever-denser cities and interconnected economies mean the costs are getting higher all the time,” said Rolf Alter, Director of Public Governance and Territorial Development at the OECD, launching the report at the OECD Forum in Paris. “Smarter risk management to improve our resilience to shocks is the only way to lessen the impact on societies and economies.”

Economic losses due to disasters in OECD and BRIC countries, 1980-2012 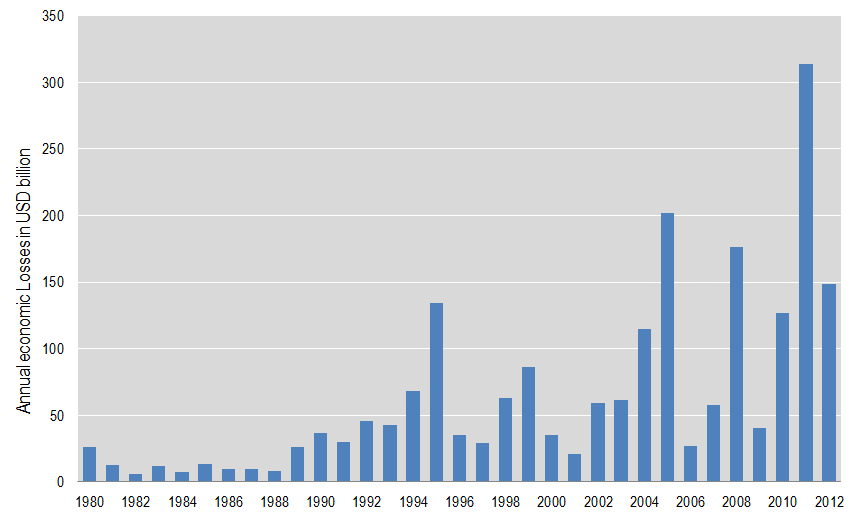 The report identifies weaknesses that risk driving up future losses. These include lapses in maintenance of protective infrastructure, a failure of regulatory reform to keep pace with new risk patterns, deficiencies at some private-sector providers of key infrastructure like energy and insufficient investment by individuals to protect assets. It finds that one country’s failure to properly manage a major risk can have a serious impact on others.

Governments should take action to raise public awareness and reduce over-reliance on the state for covering the cost of disasters, the report says. It suggests making better use of financial incentives to encourage businesses and people to protect against risks, and more national and international coordination and data sharing as a way to lessen disaster costs.

OECD ministers will discuss the report during the Organisation’s annual Ministerial Meeting on 6-7 May in Paris with a view to formally recommending their governments act on it.

On top of the tragic loss of life from recent disasters, earthquakes in Chile and New Zealand in 2010 and 2011 cost 10% and 20% of annual GDP respectively. Japan’s 2011 earthquake, tsunami and nuclear disaster contributed heavily to a 0.7% economic contraction that year and reverberated around the world economy by disrupting industrial supply chains.

For further information on the report, please contact author Catherine Gamper in the OECD’s Risk Management Division. Copies of the report are available by emailing the OECD Media Division or via the OECD's password-protected website.