16/03/2017 - Korea has improved access to environmental services and become a world leader in climate change mitigation technology. However, it will need to accelerate its green growth reforms to temper the effects of a decade of vigorous economic expansion that has pushed up energy use, resource consumption, greenhouse gas emissions and air pollution, according to a new OECD report.

The OECD’s third Environmental Performance Review of Korea recommends that the country review its energy and climate policies to ensure they are in line with its international climate commitments and do more to develop large-scale carbon capture and storage to compensate for new coal plants coming online in the years ahead. Energy prices and taxes need to be adjusted to better reflect the environmental costs of energy production and use.

With an energy mix dominated by fossil fuels, Korea’s greenhouse gas emissions rose by 39% from 2000 to 2013, the second-highest growth rate of OECD countries over the period. Korea now ranks as the OECD area’s fifth-largest GHG emitter, up from ninth place in 2000, and if current trends continue GHG emissions will have tripled by 2030 from 1990 levels. 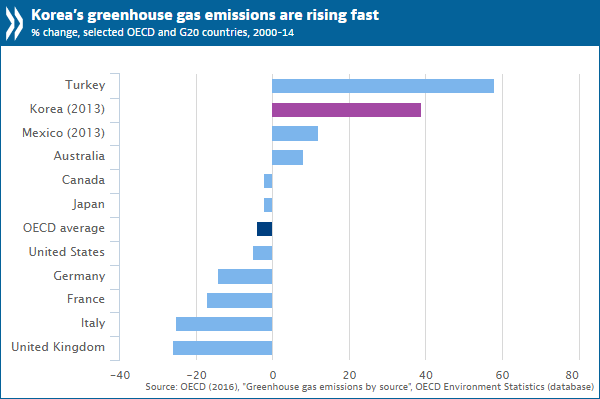 ‌“Korea has been a champion in framing ambitious green growth policies. It now needs to turn its vision into action by making progress towards its climate goals”, said OECD Environment Director Simon Upton, presenting the Review in Seoul.

“As a technology leader, Korea is well placed to profit from the transition to a low-carbon economy.  But that will only happen if it implements low-carbon reforms that reward clean-tech innovation and penalise polluters”, Mr Upton said.

The predominance of heavy industry makes Korea a resource-intensive economy, yet material productivity has improved as material consumption has been decoupled from economic growth. With the 2016 Framework Act on Resource Circulation, Korea is moving towards a “circular economy” which promotes greater recycling and re-use and contributes to raw material and energy supply security.

While there has been some shifting from oil to natural gas, current energy plans do not foresee a substantial change in the share of coal in Korea’s energy mix, and the share of renewables is the lowest of the 35 OECD countries. Fossil fuels accounted for 82% of Korea’s total primary energy supply (TPES) in 2015, just above the OECD average.

Korea launched the world’s second-largest Emission Trading Scheme in early 2015 as the centre of its climate policy. However, as currently conceived, the Scheme will underperform as an environmentally and economically effective tool for reducing GHG emissions. To provide a long-term signal, the ETS needs a more stringent emissions cap and more vigorous use of auctioning permits.

The most densely populated OECD country, with 505 habitants per square kilometre and around 70% of the population in urban areas, Korea is also among the countries most affected by air pollution. This is a particular worry in Seoul and the surrounding area, home to nearly half the population. Trans-boundary particles from China exacerbate Korea’s particulate matter (PM2.5) concentrations.