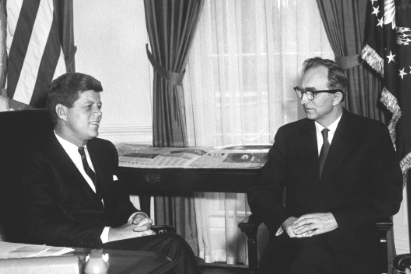 50 years ago, on 22 November 1963, US President John F Kennedy was assassinated in Dallas, Texas. The shockwave of that tragedy rocked the world and still reverberates today. The sadness at President Kennedy’s untimely death was equally heartfelt in the corridors of the OECD, an international organisation whose creation in September 1961 he personally and strongly supported.

President Kennedy proudly evoked the OECD project in his first State of the Union address on 30 January 1961, and expounded his vision for the Organisation in his ratification statement two months later.

In that statement, issued on 23 March, President Kennedy said:

On behalf of the United States, I have ratified the convention establishing the Organisation for Economic Co-operation and Development. I have done so with great satisfaction, and with expectations that [it] will become one of the principal institutions through which we pursue the great aim of consolidating the Atlantic Community. As I said in my inaugural address, ’United, there is little we cannot do in a host of cooperative ventures. Divided, there is little we can do–for we dare not meet a powerful challenge at odds and split asunder.’

In giving its advice and consent to this act of ratification, the United States senate has affirmed the intention of the United States to enter upon a new era of co-operative enterprise with our Atlantic partners. We face a broad spectrum of common economic problems.

And [the] OECD should prove a useful forum in which the member states can consider and act together on a number of the vital questions.

The first OECD secretary-general, the late Thorkil Kristensen, whose last meeting with President Kennedy was scheduled for October 1963, just a month before the assassination, was adamant about the vital role President Kennedy had played in establishing the OECD.

"Normally one would not expect a head of state to have much to do with an international organisation", Kristensen wrote in an obituary in the OECD Observer, "but the OECD owes unusually much to the late John F Kennedy because of his invigorating influence in its formative stage."

Kennedy understood the "interdependence of the continents", Kristensen pointed out, and this inspired the president’s global vision for the organisation. For instance, President Kennedy was particularly keen from the very outset that, for the OECD to make sense, Japan should become a member. Regrettably he did not live to see that day materialise, for Japan joined the organisation in 1964. Nor was Kennedy’s vision focused on the developed world; rather he saw the organisation as a hub of knowledge and experience that would radiate outwards and provide for "the hopes for growth of the less-developed lands".  It is a vision that led President Kennedy to propose the creation of the OECD Development  Centre in May 1961.

President Kennedy, or Jack as he was popularly known, was a person of remarkable energy and intelligence, and his sense of leadership and charisma won him admiration and respect in all walks of society and throughout the world. He symbolised a new optimism of hope and unity, and helped open a whole chapter in history which is still unfolding today. Though gone 50 years ago this week, John F Kennedy remains an icon of our times.  The OECD stands as a living tribute to his legacy.

John F Kennedy would be 96 today. OECD Secretary-General Kristensen’s closing lines still ring true: "It is difficult to accept that he is no longer among us."