18/03/2021 - The COVID-19 crisis has disrupted two decades of steady growth and rising living standards in Indonesia, triggering the first recession in a generation and highlighting the need to improve skills, strengthen institutions and governance of state-owned enterprises, and reduce barriers to competition. Addressing these challenges, once the recovery is under way, will help build a stronger, more resilient, green and inclusive post-COVID-19 economy, according to a new OECD report.

The latest OECD Economic Survey of Indonesia says the recovery from the economic shock caused by COVID-19 will be gradual and subject to the evolution of the health situation, with considerable downside risks. Uncertainty will weigh on investment and tourism will likely stay depressed for some time. Support to households and firms should continue as long as needed, after which efforts should focus on bringing more workers into the formal economy, enhancing skills, and improving the business and investment climate.

“Indonesia is confronting its most severe challenge since the 1997 crisis. With the right reforms, Indonesia can harness the energy and talents of its young population and get the economy moving forward again,” said OECD Secretary-General Angel Gurría presenting the Survey at a virtual launch with Indonesia's Finance Minister, Sri Mulyani Indrawati. “The OECD is here to help, with a fourth Joint Work Programme for 2022-24 which we hope will also serve to support Indonesia’s 2022 G20 Presidency.”

The Survey projects Indonesia’s GDP to rebound by 4.9% in 2021 and 5.4% in 2022 after a drop of 2.1% in 2020. This drop represents a 7 percentage point shortfall from the pre-crisis 2020 growth outlook of 5%, which will hurt many informal workers who have no social safety net. While income losses will weigh on consumption for some time, any pick-up in global trade would help Indonesian exporters, and improved business conditions from the recently approved Omnibus Bill for Job Creation could help spur domestic and foreign investment. 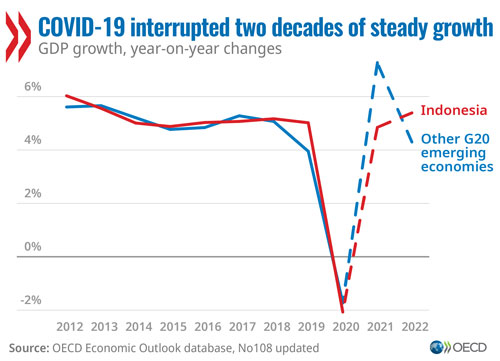 The pandemic cut short a sustained spell of economic growth that had seen GDP per capita rise from 19% of the OECD average in 2001 to 29% in 2019. Indonesia’s contribution to ASEAN GDP doubled over the same period from 17% to 35%. The current downturn could push up to 10 million people into poverty, adding to the 26 million classified as poor when the virus hit.

Even before the crisis, skills shortages and high youth unemployment were a concern. The Survey recommends stepping up vocational education and adult training, with an emphasis on digital skills. Better early childhood education can also improve later performance and help reduce inequalities. Moreover, getting more people – particularly women, internal migrants and foreign workers – into jobs will be key to mitigate the pressures of an ageing population.

The crisis has underscored the need for urgent action to address Indonesia’s low tax revenues. Poor tax compliance, generous exemptions and widespread reduced rates, with fewer than 8 million people paying personal income tax, meant Indonesia's tax-to-GDP ratio was already just 11.9% in 2018, far below an OECD average of 34.3% and half as high as in G20 emerging economies. The government estimates tax revenues may have fallen by 20% in 2020. Once the economy is out of recession, raising more revenue from property taxes – which contribute just 2% of tax revenues versus 6% across the OECD – would help to address wealth inequality while contributing to local government budgets. Increasing selected tax rates – for example, on tobacco – as well as broadening the tax base, closing loopholes and improving compliance on sales taxes could also help to shore up revenues.

State-Owned Enterprises (SOEs) will play a vital role in the recovery. Despite the favourable operational conditions they enjoy, SOE performance is uneven and their rising debt represents a growing risk. The Survey recommends aligning SOE governance with global best practices, including keeping management and boards free of government interference, and implementing high standards of integrity, transparency and responsible business conduct. Simplifying regulations and lowering barriers to competition would help to attract private and foreign investors. Indonesia should also safeguard the independence and authority of its national anti-corruption commission (KPK) to ensure it can effectively detect, investigate and prevent misconduct.

The Survey also recommends redoubling efforts to improve environmental outcomes. Continued action to address deforestation in Indonesia – largely due to “slash and burn” clearing to cultivate palm – is key. This includes better protecting, rewetting and restoring peatlands and forests, and increasing resources for environmental protection, as well as establishing a carbon price.

The Paris-based OECD is an international organisation that promotes policies to improve the economic and social well-being of people worldwide. Working with member and partner countries, it provides a forum where governments can work together to share experiences and seek solutions to economic, social and governance challenges.

Indonesia is one of the OECD’s five Key Partners, along with Brazil, China, India and South Africa. Key Partners contribute to the OECD’s work in a sustained and comprehensive manner and are encouraged to participate in the work of the Organisation’s substantive bodies through partnerships, adherence to OECD instruments and integration into OECD statistical reporting and information systems. Indonesia was the first Key Partner to sign a Framework of Cooperation Agreement with the OECD, in 2012, taking the bilateral relationship to a more strategic, whole-of-government level whilst providing a mechanism to jointly decide on mutual priority areas of co-operation. Indonesia takes part as an Associate Member or Participant in nine OECD committees and their subsidiary bodies, is an Adherent to 15 OECD legal instruments and is included in a wide array of OECD publications and statistical databases.

The establishment of the OECD Jakarta office in 2015 has strengthened this cooperation still further, as has the implementation of biannual OECD-Indonesia Joint Work Programmes since 2015. (The work streams of the third JWP, for 2019-2021, have been adjusted to take into account the impact of the COVID-19 crisis and the government’s ongoing response.) The OECD-Indonesia collaboration will be further expanded with a new, fourth Joint Work Programme and with Indonesia taking over the G20 Presidency at the end of 2021.

More information on OECD work with Indonesia is available at www.oecd.org/indonesia/.