The OECD launched three open government initiatives in Tunisia on 14 November 2020 in partnership with the Tunisian Ministry for civil service and the Ministry for relations with civil society and independent bodies. The high-level event was opened by the two ministers, Ms Hasna Ben Slimane and Ms Thouraya Jeribi, and by the Director of the Public Governance Directorate, OECD, Ms Elsa Pilichowski. It gathered over 80 participants from government, civil society and international organisations

A NATIONAL STRATEGY FOR OPEN GOVERNMENT

The first initiative launched was the development of a national strategy for open government. Tunisia is among the very first countries to draft such a strategy, and Minister Ben Slimane highlighted the need for the country to come up with a long-term strategic vision to better sustain current reform efforts. The OECD will support Tunisian authorities in drafting the strategy by conducting a scan of the current state of open government reforms, as well as by sharing good practices and policy advice throughout the drafting process.

The second initiative launched was a civic space scan and again, Tunisia is among the first countries to have committed to carrying out such an exercise. As Minister Jeribi noted, participation is a constitutional principle in Tunisia. The scan recommendations will help the authorities in their efforts to protect and promote civic space for better inclusion of citizens in public life. This initiative also marks the beginning of a new partnership between the OECD’s open government unit and the Ministry for relations with civil society and independent bodies. 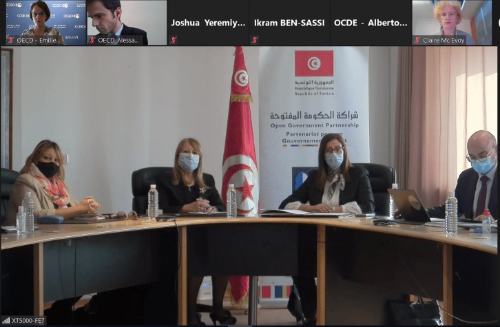 SCAN OF PUBLIC COMMUNICATION AT THE LOCAL LEVEL

Finally, the preliminary version of the scan of public communication at local level was launched. The report analyses how communication can play a strategic role in tackling public policy issues and strengthening dialogue between institutions and citizens. The scan shows that 82% of Tunisian municipalities that were involved proactively disclose public information online and 64% conduct ad-hoc communications activities, whereas only 18% have developed a strategy to do so. The scan contributed to Tunisia’s Open Government Partnership national action plan engagement on fostering open government at the local level.

‌The joint event shows the complementarity of the OECD’s activities supporting Tunisia in its open government reform agenda and paves the way for enhanced cooperation between the two ministries involved, while also closely involving civil society and independent public institutions.

LEARN MORE ABOUT OUR WORK ON