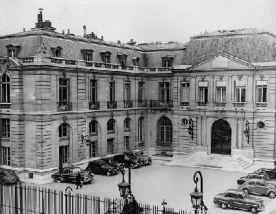 The Organisation for European Economic Co-operation; (OEEC) came into being on 16 April 1948. It emerged from the Marshall Plan and the Conference of Sixteen (Conference for European Economic Co-operation), which sought to establish a permanent organisation to continue work on a joint recovery programme and in particular to supervise the distribution of aid. The headquarters of the Organisation was in the Chateau de la Muette in Paris, France.

The European organisation adopted was a permanent organisation for economic co-operation, functioning in accordance with the following principles:

The OEEC originally had 18 participants:

Austria, Belgium, Denmark, France, Greece, Iceland, Ireland, Italy, Luxembourg, Netherlands, Norway, Portugal, Sweden, Switzerland, Turkey, United Kingdom, and Western Germany (originally represented by both the combined American and British occupation zones (The Bizone) and the French occupation zone). The Anglo-American zone of the Free Territory of Trieste was also a participant in the OEEC until it returned to Italian sovereignty.

The Secretary-General (Robert Marjolin until 1955 and then René Sergent) derived his authority from the Council. Work in the Seretartiat was carried out in directorates, roughly aligned with member country ministries and with the technical committees.

The OEEC's first objective in 1948/1949 was to prepare the European Recovery Programme which justified the American effort. Severe difficulties arose with some beneficiary countries proving incapable of reaching agreement on prior harmonisation of their long-term programmes.

The OEEC was also involved in the allocation of Marshall Aid dollars. This problem, partly solved thanks to arbitration by a "Committee of Wise Men" (G.Guindey, E.P.Roll, G.Malagodi, D.Spierenburg) in August 1949, flared up again at the second aid share-out. It was overshadowed by the British currency crisis and devaluation in September 1949. Baron Snoy d'Oppuers, Deputy Chairman of the OEEC Council, and Secretary General Robert Marjolin acted as arbitrators. They drew up a scale for sharing out the aid, which Britain accepted. Participants received 11,800,000,000 dollars between 3 April 1948 and 31 June 1950 (Britain 24%, France 20%, Italy 11.1%, FRG 11%).

A crisis hit the Marshall Plan in autumn 1949. The Americans were changing their policy regarding aid, which they considered insufficiently directed towards economic integration. Formerly, Marshall Plan credit had been used mainly to make up the European countries' dollar balance deficit. The United States was now prepared to provide credits, for the final two years of aid, on the basis of an intra-European action programme. In October-November 1949 the head of the ECA, Paul Hoffman, complained to the OEEC that it was not making enough proposals for freeing trade. Under this pressure, the Europeans arrived at an agreement to free 50% of private import trade in foodstuffs, manufactured products and raw materials. These were measures of limited scope, since the liberation related only to a joint list of products, and a large part of the trade remained State trade. Nonetheless, by the end of 1950, 60% of private intra-European trade had been freed thanks to OEEC action, a percentage that rose to 84% in 1955 and 89% in 1959.

Another outstanding act of co-operation was the creation of the European Payments Union under OEEC auspices in September 1950. It had three objectives:

Organisation of the EPU led to the creation of the necessary compensation fund to balance intra-European deficits by determining a quota for each country. The quota would act as a reference for automatic settlement of surpluses. An EPU common fund was also established to which each member would contribute up to 60% of its quota. The EPU was dissolved on 27 December 1958 when the currencies were declared convertible with dollars. EPU negotiations had been accompanied by consideration of methods of freeing trade.

In June 1950 Stikker, Chairman of the OEEC Council, put forward an action plan for the economic integration of Europe through specialisation of activities, division of labour and the creation of a single European market. Countries with heavy state trade were asked to issue long-term purchase contracts at reasonable prices, and a joint list of objects for freeing was proposed. A European fund was to be set up to alleviate the consequences of increased competition for firms. Other proposals were made to accelerate the freeing of trade, and also to give the OEEC power to organise the European economies or rationalise them. Consequently, the French and Italian ministers, Petsche and Pella, amended the Stikker Plan. Central to these projects was a European Investment Bank (EIB), which came into being with the Common Market.

The OEEC declined after 1952 due to the unexpected end of the Marshall Plan and a subsequent shift in favour of NATO. The mutual security policy that blended economic aid and military assistance - the OEEC being replaced for some purposes on 1 January 1952 by the Mutual Security Agency (MSA) - almost dealt the organisation a fatal blow. The debate on using NATO in lieu of the OEEC as the preferred vehicle for economic aid began. The military threat had given Atlanticists the idea of utilising the OEEC and its committees, teams of experts and statistical output, with a view to promoting the alliance's rearmament while controlling the difficult problems of inflation and allocation of raw materials. In the name of efficient rearmament, the British took a position in favour of a NATO economic committee, with the hope of dispossessing the OEEC. A compromise was reached: the September 1951 NATO conference in Ottawa set up a special committee (Monnet, Harriman, Plowden) charged with studying the question of the economic development of NATO countries in relation to the economic possibilities of each of the members. It was decided that the OEEC would deal with European economic questions, including those relating to the functioning of NATO, on its own. Other autonomous agencies developed to fill out the sphere of OEEC's activities.

The Marshall Plan had been a vehicle for the "cult of productivity" in the firm. A productivity programme was resumed in 1952 by a European Productivity Agency set up under OEEC auspices and largely financed by the United States. Over 3000 specialists and hundreds of farmers, organised into more than 500 teams from 15 different countries, visited American factories and farms.

In late 1957, a European Nuclear Energy Agency was set up under the OEEC. Its first act was to sign a convention establishing security controls on nuclear energy. The same year the OEEC provided the framework for negotiations aimed at determining conditions for setting up a European Free Trade Area, to bring together the Common Market of the Six and the other OEEC members on a multilateral basis. Peter Thorneycroft was responsible for coordination. Following signature of the Rome Treaties on 25 March 1958, an intergovernmental ministerial committee was set up in October by the Council of the Organisation, chaired by Reginald Maudling, to pursue the negotiations.

In September 1961 the OEEC was superceded by the Organisation for Economic Co-operation and Development (OECD), a worldwide body. In 1961, the OECD consisted of the European founder countries of the OEEC plus the United States and Canada. The list of member countries has expanded over the years, with 37 countries today.

The Historical Archives of the OEEC are available at the European University Institute in Florence, Italy.

An annotated bibliography, The European Reconstruction 1948-1961: A Bibliography on the Marshall Plan and the Organisation for European Economic Co-operation and Development is available from the OECD.